Will Zalatoris shows us the good, bad and ugly at Torrey Pines

Will Zalatoris produced one of the best up-and-downs in recent memory at the Farmers Insurance Open but his putting stroke was still attracting some criticism. 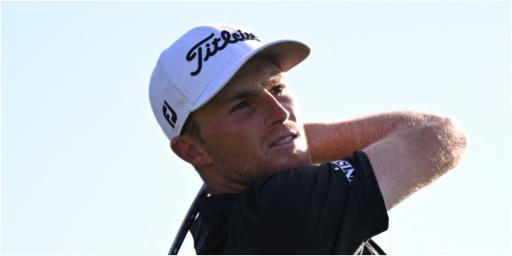 Will Zalatoris found himself in a remarkable position after three rounds at the Farmers Insurance Open on the PGA Tour.

That remarkable position was carding the second best round of the day (7-under) despite losing strokes on the putting green.

Putting and Zalatoris are two things that at present do not go hand-in-hand with the tour's rookie of the year.

We've seen a few - shall we say - yippy strokes from the 25-year-old, who is yet to taste his first victory at the pinnacle of the sport.

Related: Will Zalatoris has a shocker at The Open

There is no doubt about it, Zalatoris really should be running away with the win in San Diego after his stripe show so far.

What bodes well for him is the fact he is ranked first in strokes gained from tee to green and for approaches into the green.

He is tied for the lead with Jason Day at 14-under, who has returned to form after several years in the wilderness.

In his third round, he missed a three-foot putt for birdie on the 13th hole which would make you gag.

What followed from there was another howler. This one was at the 17th for birdie. He missed from four feet.

According Justin Ray on Twitter, Zalatoris is the first player since 2004 to shoot 65 or better on Torrey South and lose strokes on the green.

How good was Will Zalatoris' ball-striking today?

He shot 65 at Torrey Pines South despite having negative strokes gained putting.

Since tracking began in 2004, he is the first player to shoot 65 or lower on this course losing shots to the field on the greens.

Yikes. That being said, there are some improvements in his game elsewhere.

He's added an inch to his driver. That club now measures just under 46 inches.

After his third round he said it was the best he ever drove the ball, so it seems that small change has paid dividends.

Zalatoris has also taken some inspiration from Bryson DeChambeau and has gained roughly 15 pounds in weight.

He also showed off his short game prowess with one of the best up-and-downs we have seen in some time.

Just look at this below. If this doesn't deserve a slow cap then we do not know what does.

If he tightens up that putting stroke, it won't be long until he joins the winner's circle.