GolfMagic tests and reviews the new G410 Plus driver from PING. 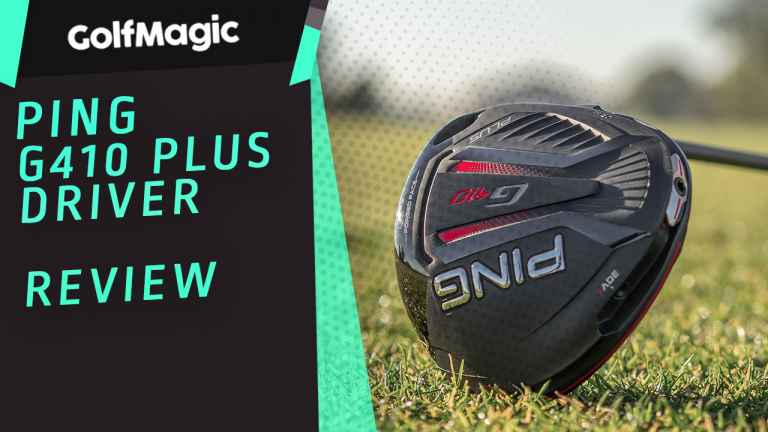 Last year, the PING G400 took the golf industry by storm as one of the most popular drivers on the market. This year, PING have released a driver that combines the level of forgiveness you expect from PING, but with the adjustability that you expect in top performing drivers - the G410 Plus driver.

The G410 driver is already proving a hit for PING staff player Bubba Watson, whose accuracy off the tee has already vastly improved since putting it in his bag. When the G410 Plus driver arrived at the GolfMagic HQ, it was definitely a driver that had us talking as we'd heard a lot of good things about this big stick.

For the first time in a PING driver, the G410 Plus has a moveable 16g tungsten weight in the back of the head. You can slide the weight to a draw or fade setting which will alter your shot shape by ten yards in the chosen setting. What PING drivers are best known for is how forgiving they are, so the brand didn't want to lose that aspect making it adjustable. So the weight has been placed in the very back of the clubhead to keep the MOI really high, so you're still getting all the forgiveness you expect when buying a drievr from PING. Check out the video below as GolfMagic's Jack Seddon tests the PING G410 Plus at Farleigh Golf Club:

One thing is for sure, the PING G410 stands out as it is unlike any other driver on the market. I like the shape of the head as it has a good balance of aerodynamics and size. The colour scheme is a safe option from PING as it's the colours the brand is known for and the matte black looks modern and clean. When the ball is at address it's definitely not my favourite driver. PING say that the turbulators on the crown of the club make the driver more aerodynamic helping to improve club and ball speeds, but I just can't get used to them. Now that's not to say that everyone will feel the same, as a lot of golfers don't mind the turbulators and some actually prefer them. It's just a personal preference as I prefer to see a cleaner design when the club is at address.

I really liked the sound of the G410 Plus. It's not the 'thud' sound that you hear a lot in modern drivers like the M5, it's more of a 'clang' but not one that's loud enough for the whole golf course to hear. The feel was solid through impact and when you flush it out the middle it's one of the best feels on the market.

The performance of the G410 Plus really surprised me. Due to the level of forgiveness you get from a PING driver, I didn't think my numbers would be quite so good. It was a really easy driver to hit, which made my numbers very consistent. It's not quite as long as a afew others I've hit this year, but the combination of forgivess and length makes this one of the top performing drivers in 2019.

The PING G410 Plus driver was one of the five that received a GolfMagic gold star in our top 10 drivers list for 2019. If you can look past the turbulators and just want a top performing driver that you're going to hit pretty far, but with plenty of forgiveness, then the G410 Plus is the driver for you. If you're a player that really struggles with a slice, then remember there is also the G410 SFT model, standing for Straight Flight Technology, which has a heavy draw bias in the neautral setting. The G410 Plus is easily the most forgiving driver we've tested this year and we're sure it's going to prove extremely popular in 2019.