A weekend hack lost a bet and had to peg it up in a local U.S. Open qualifier. This is his story. 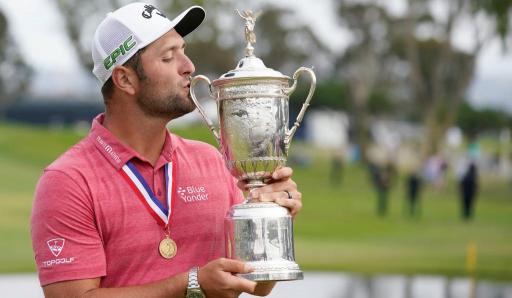 As golf pros will tell you, the route to the majors through local qualifying can be absolutely maddening and downright stressful.

It takes an awful lot out of you and when you finally get down to the final stage of qualifying - for any major - there are only a few spots up for grabs.

On Monday this week, pro golfers Cole Gritton and Thomas Henson were at Oakwood Country in Kansas City, Missouri, for their local U.S Open qualifier.

They were going off the 10th tee and everything, to all intents and purposes, was normal. Their playing partner for the day was dressed normal, had caddie and the "pros" shook hands.

"But it was nothing normal after that," Gritton told GolfChannel. Over the course of the next 18 holes, their playing partner John Eckert displayed that he was in fact a weekend hack.

Eckert had lost a fantasy football bet and was forced by his pals to play as punishment. During his round, he took 112 strokes which left him at a mammoth 40-over par.

Gritton told GolfChannel he believed something was awry when Eckert pulled out his hybrid for the first tee shot down the par-5 10th hole when the fairway is wide open.

A guy lost his fantasy football league and had to ply US Open locals…and it didn’t go well. pic.twitter.com/A4VjaqPfr0

Gritton told the publication: "He's aimed about 30 degrees left, and he just cold tops it about 15 feet.

"I didn't even know what to say.

"He kind of got it up there decent, but the next red flag was he was putting with his glove on.

"I was thinking maybe this is just some weekend warrior and this has been his dream to play a qualifier."

Eckert did have some moments of acceptable golf. He made par at the 12th, but followed that with back-to-back quadruple bogeys.

Elsewhere, he did find three more pars in his final six holes.

"He was pretty quiet for most of the round," Gritton said.

"I actually figured out on the second hole that he graduated from Fort Hays. He was like, 'But I didn't play golf there.' And I'm thinking, Well, obviously."

Eckert told ESPN: "I'm pretty happy with for pars, for sure. The walking got to me. I'm more of a cart guy myself.

"The nerves started to calm down and I settled into the round."

He added: "If this were a two-round qualifier, the field may have been in trouble.

The two pros didn't play too great either, each posting 81.

Gritton told GolfChannel: "I think he was embarrassed and sorry, but he knew what he was doing.

"I'm glad the story blew up, but at the same time, who knows how many fantasy leagues are going to make this their punishment next year."

Gritton confessed of the whole saga that he was "kind of mad, kind of wanted to laugh" and "didn't really know what to feel".