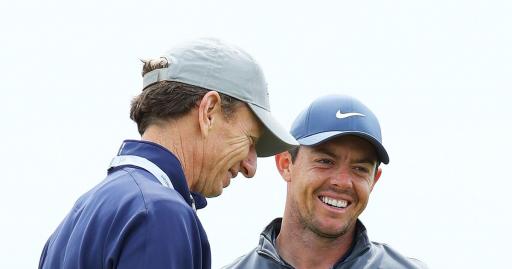 Slowly but surely, Rory McIlroy is getting there on the greens. Now armed with a TaylorMade putter he seems comfortable with, the Ulsterman has been spending a great deal of time with arguably the game's greatest ever putter, Brad Faxon.

Faxon, an eight-time PGA Tour winner and now golf analyst for Fox Sports on top of acting as a putting coach, explained he has not so much been giving McIlroy tips on improving his putting stroke, but more general advice about his thoughts.

"It's not really the stroke we have looked to improve, it's more the approach," Faxon said in Golf Digest's latest podcast.

"It's how a player thinks before they putt, and after. Some of it is the stroke, of course, but the World Golf Hall of Fame is full of players who aren't conventional putters. It's not an easy answer to improve someone's putting.

"It's not just a case of 'Rory you take it back more on the inside'. The help I give him is more off the course than on the course."

That was evident when McIlroy rallied with a sublime final-round 64 to win at Bay Hill in March, where he gave a hat tip to Faxon in the process.

"Brad freed up my head more than my stroke," said McIlroy, who currently ranks 55th in strokes-gained putting on the PGA Tour (.237).

As for the rest of McIlroy's game, Faxon is in awe: "Rory's got more potential than anybody. He's got the most complete game I've ever seen. He can hit the ball long, high, low, right, left, and he's good around the greens."

Faxon talks more about McIlroy's putting stroke in the podcast below, as well as discussing his thoughts on Tiger Woods, his round with Woods, Dustin Johnson and Donald Trump, and last year's "girlfriend gaffe" at the US Open where the announcer got the name of Brooks Koepka's girlfriend wrong...