Tyrrell Hatton wants the PGA of America to be a bit more creative rather than just making the course hard through length. 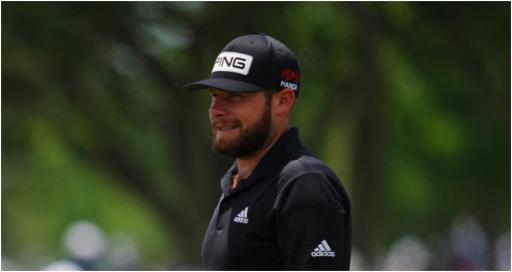 When it comes to Tyrrell Hatton, one thing you can always count on is his honesty.

Earlier in the season on the DP World Tour, the Englishman absolutely blasted the par-5 18th at Yas Links in Abu Dhabi.

In his words, it was one of the worst-designed holes he had ever seen. He decided to snap one of his clubs over his knee on that hole.

Hatton is also no stranger to damning assessments of his own game. How often do we see him berating himself?

Even at the Masters, he appeared to be having a battle with Billy Horschel over who could be the most ticked off.

At the second major of the season at Southern Hills it appears Hatton, 30, wants the PGA of America to be a bit more creative.

Pressed about the "common denominator" of PGA Championship courses, Hatton was unflinching in his response.

"It would be nice if they were a bit more creative with course setup rather than just trying to make it hard through length all the time.

"[The] PGA seems to just be getting longer each time we come back and play."

Perhaps Hatton does have a point. The course is 7,556 yards and the greens are going to firm up as the week goes on.

What does Hatton think about the length?

"Well, it gets to the point of the further you hit it, the kind of better it is.

"Like I said, this week is maybe slightly different with if you are missing fairways you're not just gouging it out like 80 yards, and everyone is missing fairways, so if you get it down there, the easier it is to save par."

Hatton also shared his fears about slow play due to the changes that have been made at Southern Hills.

He added: "I mean, they're going to have to be fairly careful with how they set the golf course up because of where some of the tee boxes are.

"You might not be able to tee off while the group that are waiting on the tee are having to wait for the guys to tee off on the next hole to then get out of the way before they can hit their shots in.

"So if they don't set the course up in a way that -- the rounds could be just stupidly slow, which at the end of the day no one wants.

"You want to get around in a reasonable time. Hopefully they're fairly smart with how they do that."

At the time of writing, Hatton was level par through his first seven holes of the major, so was managing the length reasonably well.