Take a look at what awaits the players this week as they take on Kiawah Island's Ocean Course for the 2021 PGA Championship. 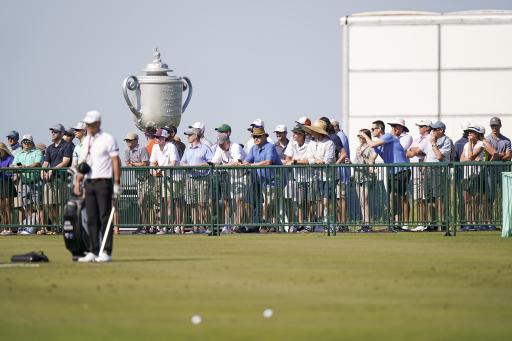 Major week is upon us and by now the excitement should be settling in for you as you prepare to spend hours sat in fron of the TV watching the PGA Championship, much to the delight of your partner.

The second major of the year takes place at Kiawah Island's Ocean Course, which happens to be where Rory McIlroy claimed his first PGA Championship back in 2012.

With just a few days until the action gets underway in South Carolina, we want to give you a hole-by-hole guide on what awaits the players this week.

#1 - Par 4 - 396 yards: The first hole will be one that most of the players plan on making a birdie and will probably be a little disappointed if they walk away with anything worse. It features a narrow fairway, with a waste area to the right and thick grass to the left, but a good tee shot leaves a fairly simple approach onto the green.

#2 - Par 5 - 557 yards: Depending on the weather conditions, we should see plenty of eagle opportunities at the second hole, with most able to reach the green in two, should they have a little help from the wind. There is an elevated green between two sand ridges which the players should have no problem finding for three if they haven't been able to set up the eagle chance.

#3 - Par 4 - 390 yards: The third hole is the shortest par-4 on the course but it is by no means an easy one. From the tee, the best set-up will be the left side of the fairway, which allows a great angle into the small island green and is guarded by what is known as the 'Rory' tree, after the Northern Irishman got his ball stuck in it during the third round.

#4 - Par 4 - 484 yards: We could see a lot of players find trouble at the fourth hole, with it regarded as the toughest on the front nine, while it is also playing 26-yards longer than it did in 2012.

#5 - Par 3 - 207 yards: Things don't get much easier at the next hole, with a difficult hourglass-shaped green that requires an accurate tee shot, otherwise players face a very tricky two-putt to save a par.

#6 - Par 4 - 490 yards: With three oak trees framing the fairway at the next, players will likely aim at the one in the middle, whilst drawing it back to avoid the waste area. The green is a narrow one, protected by sand on either side.

#7 - Par 5 - 579 yards: The tee shot at the next par 5 will depend on the wind, with the longer players taking it over a natural dune area from the right, while the safer play will see players hit to the left. Those who make it over the right will have a better chance of reaching the green in two.

#8 - Par 3 - 197 yards: This par 3 plays is a fairly simple hole, but becomes more of a challenge when the pin gets moved deeper into the green, which is framed by live oaks off the front left corner. Players who fire it long or miss the green right will find the sand.

#9 - Par 4 - 514 yards: The next hole will be one that the longer players should find easier, with the wide fairway sloping down from the right, but those who find trouble in the swales and waste areas will face a tricky up-and-down.

#10 - Par 4 - 447 yards: A risk and reward hole to start the back nine, where a tee shot down the left side of the fairway sets up an approach to the green that is situated down into the dunes.

#11 - Par 5 - 593 yards: Unlike the previous par 5's, this hole will likely play as a three-shot hole to the green, unless there is some help from the wind. The key is to find the right area to set up the third shot, which is on the right side of the fairway to take the large waste area out of play.

#12 - Par 4 - 484 yards: With the widest fairway on the golf course, this hole is playing 72 yards longer than it did in 2012. The tee shot might look appealing, but the approach is extremely narrow, with a canal guarding the right of the green and more trouble to the left and rear.

#13 - Par 4 - 497 yards: The canal down the right of the 13th hole is a concern from start to finish, with players having to drive over it for their tee shots, but will need to judge carefully how far they hit it. The approach needs to be an accurate one, with the green protected by two waste areas on the left, with the canal continuing on the right.

#14 - Par 3 - 238 yards: The first of five fantastic holes that should cause plenty of drama throughout the tournament, The elevated green is very exposed to the wind and anything missed will cause a tough par save. Players will face more problems when hitting into the wind, due to the green sloping from front to back.

#15 - Par 4 - 466 yards: After facing the difficult par 3, the 15th should be slightly easier, but finding the fairway is crucial, so you may see plenty of 3-woods used off the tee.

#16 - Par 5 - 581 yards: Another great opportunity to make up some shots, with a tee shot over the pond to leave the players with a chance of reaching the green in two. There should be little problems at this hole and those who walk away with a par will be kicking themselves.

#17 - Par 3 - 223 yards: A beautiful par 3 for the penultimate hole where players will find trouble in the water to the right, or bunkers and waste areas to the left.

#18 - Par 4 - 505 yards: With scenes of the Atlantic Ocean to the right, the best tee shots will find the right side of the fairway, which is guarded by sand and a waste area for those who block it.This long par 4 may require some long irons or even metalwoods into the green, which makes the appraoch one of the most testing on the course.