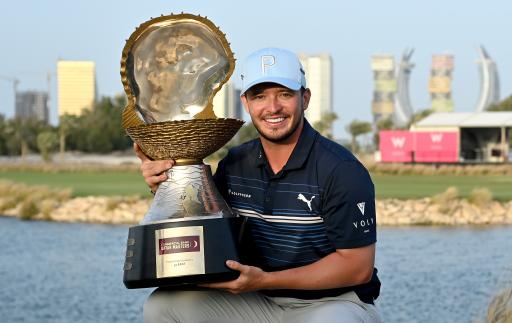 The 25-year-old Glaswegian emerged with a one stroke victory over American Chase Hanna at Doha Golf Club with a gutsy 2-under par 70 final round in the windy conditions.

Spaniard Pablo Larrazabal looked like he was going to race away with the win after he opened his week with a stunning 8-under par 64.

But a catastrophic weekend saw him shoot rounds of 3-over and 2-over to finish in a tie for fifth as Ferguson forced himself into contention.

He said: "Unbelievable. Honestly, I just can't believe it at all. [This is] just years and years of hard work."

He added: "My whole family gave me everything to try and get into this moment and [it's] just an absolute dream come true. Can't believe it."

Ferguson took a phone call from his father after the win. "He just said he's so, so proud. He always tells me that anyway which makes me feel relaxed every day.

"When I'm out there [I know] I'm making him proud and I'm trying my best and that's all you can do isn't it and I've been saying that for ages.

"[I knew I could] get over the line eventually, you know, just keep working on it and learning and I think I have been in contention enough now on Challenge Tour and out here at the start of this year a little bit.

"I just managed to deal with it today and I'm obviously a winner now. It's incredible."

The Scot previously admitted that the pressure got to him at the Magical Kenya Open a few weeks ago when he threw away a four-stroke lead heading into the final round. Ashun Wu won that day.

Ferguson said the win was for his mother on Mothering Sunday.

He said: "That was for my Mum, I know she will be watching at home crying."