Ian Poulter was displeased on his birthday as he realised other dog owners in his neighbourhood were not picking up after them. 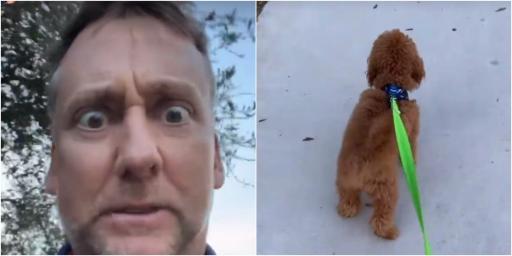 Ian Poulter, who celebrated his 46th birthday recently, was left raging at other dog walkers who refused to pick up after their pets.

Poulter took to his Instagram stories walking his Cavapoo in Florida but was left outraged at other dog owners when he spotted some mess.

The Ryder Cup legend says in the video: "It's my birthday, it's dog walking time. And we can see some crap that is not ours."

Left outraged, Poulter goes on a rant with his eyes popping as if he's drained another miracle putt at Medinah: "Pick up your dog crap!".

"It drives me mad. It's really easy when you go out for a dog walk. You have a bag and you pick up one bag with s****.

"And it keeps the neighbourhood really clean, and your neighbours are all really happy with you. You're welcome."

Poulter, other than walking his dog Enzo, appeared to spend the rest of his big day practicing his putting.

Poulter, ever the jokester, last week saw the funny side last week of Tyrrell Hatton's golf cart running out of battery.

He also had an interesting struggle with his Christmas tree. Getting inside his house was one thing, but getting it out? Another problem.

Poulter managed to keep hold of his undefeated record in the Ryder Cup singles in September at Whistling Straits.

He admitted afterwards that it may be the last time we see him in the famous blue and gold colours.

Related: Ian Poulter disgusted with himself over missed cut

Equipment
Do FootJoy produce the BEST golf shoes on the PGA Tour?
LIV Golf
Kevin Na on Saudi: "People come up with rumours and they write things"
The Masters
Ian Poulter responds to golf fan after being called a d*** in his DMs
The Masters
Ian Poulter says he "felt like s---" after missing out on The Masters
PGA Tour
Will Lee Westwood get to wear Ian Poulter's famous gold lamé shirt?