Rory McIlroy says he wants to force Richard Mansell to shoot under par on the final day of the Alfred Dunhill Links Championship on the DP World Tour. 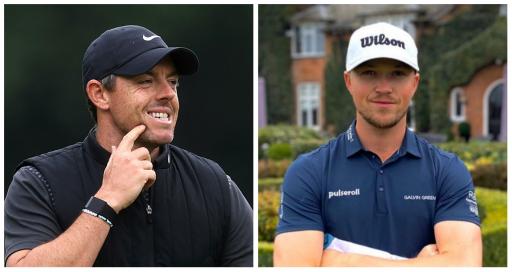 Rory McIlroy finds himself eight strokes behind leader Richard Mansell at the Alfred Dunhill Links Championship on the DP World Tour heading into the final round.

Mansell admitted his number one priority after playing his second round was trying not to develop pneumonia overnight.

If you didn't know, the players were simply battered by the conditions in Scotland. England's Tyrrell Hatton said he was laughing but he was crying internally. Eddie Pepperell said there was suffering on a mass scale.

It was so bad that England's Matthew Fitzpatrick - usually an avid note taker - decided not to even bother trying. "Even Anne Frank wouldn't have diarised out there today," chimed Pepperell to Fitzpatrick on social media.

The players taking it in turns to play Carnoustie, Kingsbarns and the Old Course at St. Andrews this week. The final round will be played at the Old Course.

There have been some snipes about the LIV Golf Invitational Series as the DP World Tour had to resort to a shotgun start due to the weather.

The cut has now been made after 54 holes and Shane Lowry - who took a dig at Bryson DeChambeau earlier in the week with other tour pros - was one of the biggest names to miss out.

Mansell is atop the leader board at 15-under par, having notched six birdies and one bogey at Carnoustie on Saturday.

"I've been in contention a lot this year and had chances on Sundays. They say in golf that you don't lose, you learn. That's what I feel like I've done really well this year.

"There's a lot of golf left. It's links golf, anything can happen. It's St Andrews. People can shoot 60. I'm just really focused on myself right now.

"I'm going to try and shoot a good score, see where it puts me, and not worry about anyone else."

McIlroy is eight strokes behind Mansell. Though the most entertaining moment of the day came courtesy of his father.

The Northern Irishman. who carded a 6-under 66, also told Sky Sports: "The rain yesterday softened the course up so even though it was windy out there the ball was stopping roughly where it landed and that made it quite scoreable.

"I find it hard to see how someone doesn't go out there and shoot at least a couple under. It's as easy as it can be right now.

"If I could shoot eight under [on Sunday] you'd have to make Mansell shoot under par so that's a target."