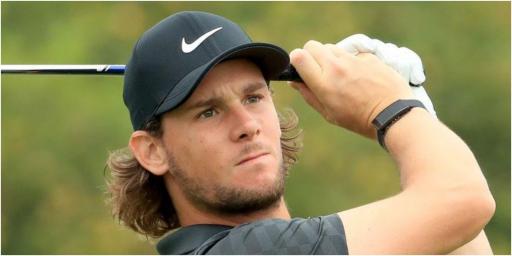 Sensible Thomas Pieters held his nerve to claim the Abu Dhabi HSBC Championship by one stroke.

On a day of high drama which included an unlikely charge from Rory McIlroy, it was the 29-year-old Belgian who emerged victorious.

Shubhankar Sharma and Rafa Cabrera-Bello were the ones who came closest to toppling Pieters. Viktor Hovland also threatened.

The Indian and Spaniard both finished at 9-under par to set the clubhouse lead to force Pieters to make par or better at the last.

In the end, Pieters' drama-free 72 to add to his previous rounds of 65, 74 and and 67 were enough to claim his first Rolex Series win.

Incidentally, he becomes the first Belgian player to claim a Rolex Series title.

Pieters made the turn at Yas Links in 1-under par. The only blemish of his round coming at 11 with an unlikely three putt.

Seven pars on the spin followed as he headed for the clubhouse as the chasing pack made bogeys.

At the par-5 18th, a monster hole, Pieters laid up and then sent his pitch to around 30 feet. He managed a safe two-putt for victory.

The unlikely 54-hole leader Scott Jamieson fell by the wayside early on in the final round.

Shane Lowry was regarded as the one to beat having already tasted victory here.

But a triple bogey at his first hole of the day dented his hopes and in the end he never recovered.

McIlroy made the cut on the number and then forced his way up the leaderboard over the weekend.

Few would have expected him to really challenge for the title but on Sunday he kicked his game into gear.

A hole-out eagle and tap-in birdies propelled McIlroy into contention but then disaster struck at 14.

McIlroy sent his tee shot into the jungle and was left with an interesting situation. Play it lefty? Take the drop?

He has never been someone who has ever been accused of having questionable integrity with the game.

But he was visibly uncomfortable after taking advantage of the free drop to gouge the ball back into the fairway.

The biggest win of @Thomas_Pieters' career!

From there, it all went pair-shaped. He played the final four holes in 2-over par as his challenge fizzled.

He let out an audible laugh after sending his second shot into the water at 18.

McIlroy later admitted he hadn't hit a full-blooded iron shot all week and was still figuring out his new equipment.

"Honestly just happy enough that I got to play an extra two days," he told Sky Sports.

"Almost made the most of the weekend."