Justin Thomas gave his father an old Titleist Vokey SM6 wedge. And it has a pretty cool backstory. 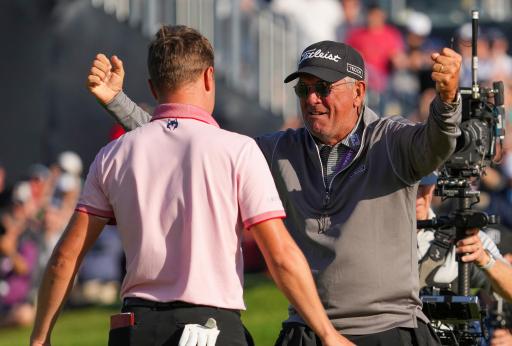 When you see Justin Thomas play golf, you'll notice that his father Mike is never too far away.

Related: What equipment does Justin Thomas use?

Afterall, his dad is his swing coach and has been all of his life. It's a partnership that has now yielded two major championships after his son memorably prevailed in a playoff last week at the US PGA at Southern Hills.

Eagle-eyed viewers might have also noticed that over the years dad Mike always can be seen carrying an old, battered Titleist Vokey SM6 wedge. He uses it sometimes as a sort of cane.

And now it can be revealed that the old wedge is in fact stamped with notable memories and events that Mike and son JT have shared together.

Each stamping is done by Vokey wedge rep Aaron Dill. He took to Instagram to further elaborate.

Dill wrote: "Really cool story here. @justinthomas34 dad @mikethomaspga has been using this old gamer wedge that Justin gave him. Mike had this great idea that every week he was out with Justin we stamp something on the club to commemorate that experience.

"This has become a really cool tradition for Mike and I and a great keepsake and walking stick to have when Mike is out coaching Justin. A ton of great history is on this club and we don’t plan to stop stamping until it's completely covered."

Thomas also recently spoke about the interesting dynamic he shares with his father.

He was asked how they navigate moments together when things aren't going to plan on the range when he isn't flushing it like he usually does.

Thomas told the media: "It's a lot different. I get pissed at him sometimes, and I think as a dad he doesn't want to -- he's not going to go full Butch Harmon or Pete Cowan and tell me I suck or that's not very good or whatever it is, and sometimes I would love for him to say that just because I want to hear it.

"I mean, I have to remind him sometimes, you're not my dad out here, you're my swing coach, and I need you to tell me if something is wrong. I don't need my ego boosted. I'm here to try to win a golf tournament and play well, so do your job kind of thing.

"It's gotten a lot better over the last couple years, but it's like any player-coach relationship. You need that accountability, I think."