Tiger Woods has confirmed he will play a different Bridgestone golf ball for The Match and very likely at the PNC Championship. 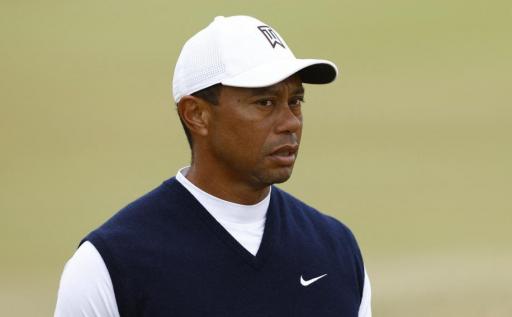 Tiger Woods is set to switch his golf ball ahead of The Match and the PNC Championship, sticking with Bridgestone Golf but changing the model.

Woods has changed to the Bridgestone Tour B X golf ball from the Tour B XS model. The Tour B X ball is built to spin less which will help the 46-year-old gain more distance.

Elliott Mellow, the marketing manager for Bridgestone Golf, said that Woods can hit one less club into the green with the Tour B X ball, despite "giving up a little control."

Related: Some fans think Tiger created the Nike swoosh by doing THIS!

"The Tour B XS is a great golf ball, it has the feel and spin I've preferred," Woods said via Bridgestone Golf.

"Right now, though, I’m experimenting with the Tour B X to get a little more pop. Based on the situation, I have different preferences and it’s great that Bridgestone has multiple balls right off the shelf that I can play."

Woods recently joked he might switch to a yellow golf ball.

Back in February, Woods was involved in filming content surrounding Bridgestone Golf's Tour B XS golf ball. This was the ball he used when coming second in the PNC Championship last year with his son Charlie.

At the popular family-based event 12 months ago, Woods said that "the ball (in general) is not quite flying as far as I'd like or I'm used to," as he began to live with the extent of his injuries which he suffered in a life-changing car accident in February 2021.

When he was in the NBC commentary booth at the Hero World Challenge last week, he joked that Charlie was beginning to hit it past him off the tee box, saying, "He hasn't beaten me yet. But that is coming."

Woods could certainly feel the heat with the driver when he and Rory McIlroy face Jordan Spieth and Justin Thomas in The Match at Pelican Golf Club on Saturday.

Only Cameron Champ averaged further off the tee last season on the PGA Tour than McIlroy. The Northern Irishman 321.3 with his driver in 2022 which helped him to return to World No.1 and win the FedEx Cup for the third time.