Rory McIlroy was the hot favourite heading into the Irish Open at Mount Juliet this week, but he will have his work cut out to contend at the weekend. 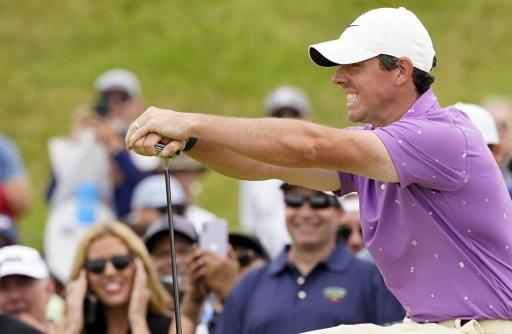 Rory McIlroy shot a conservative round of 72 to fall eight shots back in the first round of the Irish Open on the European Tour.

Although the Northern Irishman was the hot favourite heading into the week at Mount Juliet in Kilkenny, he failed to find a birdie charge that could help him challenge the early pace set by Lucas Herbert.

The four-time major winner began his day with three bogeys and just one birdie on his first nine to go out in 2-over-par, playing alongside Tommy Fleetwood and defending champion John Catlin.

The 19-time PGA Tour winner bounced back with birdies at the 10th and 13th holes to make it back to level par for his round and he would go on to finish on evens.

McIlroy won the tournament back in 2016 when he finished three shots ahead of Bradley Dredge and Russell Knox at The K Club and he is aiming to join Jon Rahm and 10 other players who have won the event multiple times.

Herbert, who is one of the players in the field this week looking to secure Open Championship qualification, shot a scintillating score of 8-under-par on Thursday in Kilkenny.

The Australian scored nine birdies, five of which came in the space of seven holes on the front nine, and one bogey on day one to set a strong lead at Mount Juliet.

McIlroy's playing partner Tommy Fleetwood has only made two top-10's in his 15 appearances on the PGA Tour in 2021, but he shot a solid score of 5-under-par on day one at the Irish Open.

The World No. 33 bogeyed his very first hole of the day but bounced back with six birdies to fire a 67 and sit three shots behind Herbert.

NEXT PAGE: HARRY KANE CHIPS IN TWICE IN A ROW DURING ENGLAND GOLF CHIPPING CHALLENGE!