PGA Tour: Is it time for a REVAMP of the FedExCup format?

Is now the time to change the staggered FedEx Cup format to something that could be fairer for every player? 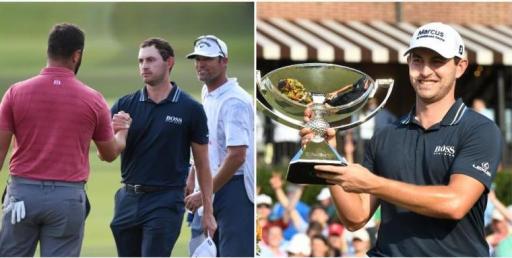 So there we have it, the FedExCup champion has been crowned and it's Patrick Cantlay.

The season-long race culminated on Sunday with Cantlay keeping an ice-cool head on the 18th to make birdie and ultimately win by one shot over a charging Jon Rahm.

But much has been said and will continue to be said about the format which was changed in 2019 from a purely points-driven race to one where the final event determines the champion.

Never mind how well you play over the previous months, it all comes down to this.

It means that, hypothetically, Justin Thomas can win every single PGA Tour event and only be the leader by two shots come the Tour Championship.

To most golf fans, it just doesn't seem right - but at least the sponsors are happy.

Does it really matter if the players aren't on board though?

Even the winner, Cantlay, had some choice words about the format.

"I don't like the fact that somebody else shot the lowest score this week, and they would have won the Tour Championship in years past," he told the media.

Rahm, a win or bust kind of guy, also is not a fan.

"I don’t like that at all. I think you have the Playoffs itself and win the first two, and if you don’t play good on the last one, you can end up with a really bad finish," Rahm said.

361 yards @Patrick_Cantlay unleashed it all on the 18th tee. pic.twitter.com/Dq4HM8hJA6

How cool would it have been to see Cantlay and Rahm peg it up for a playoff to determine the ultimate winner?

Other major sports are decided fairly over who has performed best over the entirety of the season, so why not the PGA Tour?

Time for a rethink.

NEXT PAGE: WHAT'S IN THE BAG OF CHAMPION PATRICK CANTLAY?