A likely cause of the fire at Oakland Hills Country Club has been revealed by the local fire chief in an ongoing investigation. 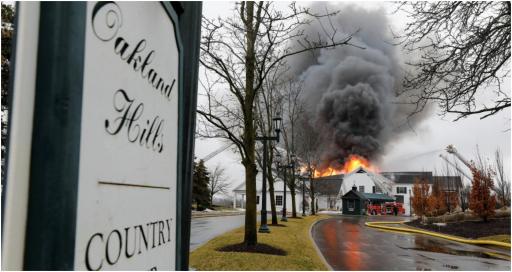 It was a horrific sight to see. In February, Oakland Hill Country Club - which hosted the 2004 Ryder Cup - went up in flames.

The images of the horrific blaze were posted all over the Internet. The clubhouse, which is nearly 100 years old, was completely destroyed.

Now local authorities believe they have evidence from their ongoing investigation that points to a propane torch used by construction workers as the potential cause.

They were reportedly installing "rubberized flashing" during the rebuild of a patio on the east side of the clubhouse.

When the workers saw the blaze, they attempted to put it out quickly but it was all too late.

Firefighters rushed to the scene. The flames looked uncontrollable and it spread through the walls and into the attic, eventually engulfing the entire clubhouse.

It took fire crews almost a day to extinguish the blaze. Nobody was injured in the fire but it is estimated that $80million damage was caused.

The club had been attempting to bring the U.S. Open to Oakland Hills. They had previously lobbied the USGA and had eyed up potentially hosting the major in either 2028 or 2031.

It has already been confirmed that Oakland Hills will host the 2031 and 2042 U.S. Women's Opens.

Earlier in March, a fire ripped through the $90million Beaverbrook Golf Club in Surrey, England. Nobody was injured.