Perhaps this is a lesson learned... 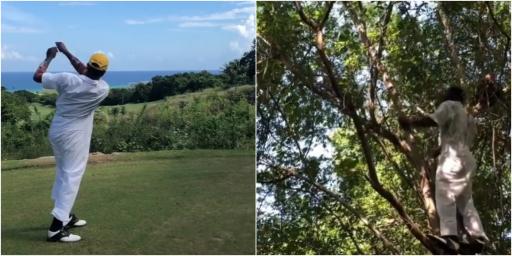 Bryson DeChambeau has shown the world just how awesome and just how difficult it is to swing a long drive club.

The speed, the power, the flexibility. How he maneuvers his body to get into the correct position at the top to absolutely unleash hell through the ball hitting it more than 400 yards on a regular basis is wicked to watch. Long drive athletes are impressive, to say the least.

But this is something special. Professional long driver Ken Long, from Canada, has shared this clip on his Instagram page in which he lets his caddie for the day peg it up and have a go for himself. Without a glove. What happens next seems like it's from a comedy sketch.

The set-up is alright. Even the swing is okay, but through impact? Not so much. He lets go of the club and it goes sailing into a nearby tree. Perhaps he really did need a glove to keep hold of this beast of a club. The caddies reaction? J**** C*****. Priceless.

Long's caddie was in a white boiler suit but there's no chance we'll ever see something like this at Augusta National. Long was playing at the White Witch Golf Club in Jamaica. Thankfully, his caddie decided to climb up the tree where the club ended and get it back.

It took a few jiggles of the branches but in the end Long got the club back. Lesson learned, then. Never accept an opportunity to swing a professional long driver's club without a glove and certainly watch out for surrounding trees.

What a beautiful game

This can't be real

Does he get a tip at the end of the round?

PGA Tour
Who is Lucas Herbert's caddie? Meet the CARRIER for the newest PGA Tour winner
PGA Tour
PGA Tour: ZOZO Championship leader mistaken for a caddie before first round
Golf news
WATCH: Caddie protects young golfer from TORRENTIAL weather conditions
Golf news
Rules Debate: Which player would incur a penalty in this situation?
Golf news
Did you know this rule about caddies standing on their player's putting line?