Lee Elder: How speeding ALMOST prevented him from watching Tiger Woods win in 97

The legendary golfer was in a rush to watch the moment of history at the 1997 Masters but almost missed it... 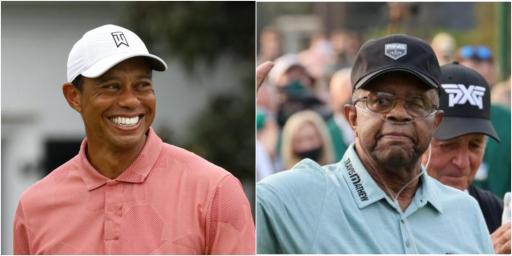 Tributes are flooding in for legendary golfer Lee Elder, who has died at the age of 87.

Elder made history in 1975 when he became the first African-American player to play at the Masters.

Just last April he was made an honorary starter at Augusta National and stood to a thunderous round of applause from the patrons standing alongside Jack Nicklaus and Gary Player.

It was an emotional moment for a trailblazer of golf and an image that will endure for years to come.

"He was the first," Woods previously said. "He was the one that I looked up to. And because of what he did, I was able to player here, which was my dream."

It was on a Sunday in 1997 where Woods claimed the first of his five green jackets at Augusta National. Elder wanted to witness the moment of history.

So much so, he reached a speed of 85mph on the eastbound I-20 in Georgia on his way to watch Woods. But a cop noticed he was going over the speed limit of 70 and signaled for him to pull over.

"I've got to get to the Masters," Elder previously told the Los Angeles Times, telling the story. "I have to see Tiger Woods."

"I was telling him, 'There's history about to be made in your state. Tiger Woods is about to win the Masters...

"I'm just trying to get there before he tees off."

The cop continued to write out a ticket, Elder said.

Lee Elder, the first black man to play in The Masters, has died aged 87.

He changed golf forever back in 1975, and in April this year he was honoured alongside Jack Nicklaus and Gary Player as they got the 2021 Masters underway. pic.twitter.com/lVYyABbVnT

Elder managed to get there in time.

"I always felt I would return to Augusta for this occasion," Elder later said. "Not necessarily for this young man in particular. But I knew that somewhere down the line, this day would come.

"This is a happy and glorious day for all blacks, for all of us, in all walks of life."

Elder missed the cut at the 1975 Masters after shooting rounds of 74 and 78. Asked what response Woods would have received in those days, Elder said: "They probably would have needed armed guards for the first tee."

Elder reportedly made it just in the nick of time to see Woods' 3.08pm tee off time back in 1997.

But he told the cop after picking up his speeding ticket: "If you'll excuse me, can I go wish him luck now?"