Mingyu Cho was supposed to take a free drop. He didn't, and it cost him dearly on the Asian Tour. 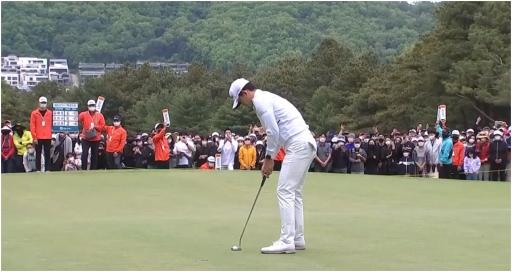 Sometimes in golf it pays to know the rules. And over the weekend, Mingyu Cho found out the hard way when playing the GS Caltex Maekyung Open on the Asian Tour.

The Korean was well in the mix during Sunday's final round but things took a dramatic turn when he sent a wild drive way, way right of his intended target at the ninth hole at Namseoul Country Club.

It was so wild that he was playing his second from the putting green of the second hole. He was supposed to take a free drop. He didn't and his chances were obliterated.

The Rules of Golf, specifically Rule 13.1f, say that "relief must be taken from wrong green".

By not taking the drop, he was given a two-stroke penalty and it just so happened he finished two strokes behind the eventual winner Bio Kim.

Kim was previously banned for 12 months by the Korean Professional Golf Association in 2019 when he made an obscene gesture to the crowd during the final round of the Korean Tour's DGB Financial Group Volvik Daegu Gyeongbuk Open.

The ban was initially for three years but it was later reduced to one year. Kim stuck his middle finger up at to the crowd after someone allegedly took a photograph during his swing.

The rule that cost Cho has been seen on the PGA Tour before.

In the second round of The Barclays 2014, Seung-Yul Noh's tee shot on the 11th hole landed on the green of the third hole.

Unaware he was supposed to take a free drop, Noh then hit his next shot from the green and was given a two-stroke penalty.

"I've never seen anything like it," the rules official said.

Bio Kim has been knocking on the door for a first win on Tour.

He will celebrate his first Tour victory with his mother and wife on Mother's Day #MaekyungOpen #whereitsAT pic.twitter.com/IAlDpiMeO6

In full, what the Rules of Golf say about taking relief from the wrong green:

When there is interference by a wrong green, you must not play the ball as it lies.

Instead, you must take free relief by dropping the original ball or another ball in the relief area.

There is no relief under this Rule if interference exists only because you choose a club, type of stance or swing or direction of play that is clearly unreasonable under the circumstances.