Topgolf is fast becoming a place for viral golf videos, but is this one staged as one man does his best Happy Gilmore impression? 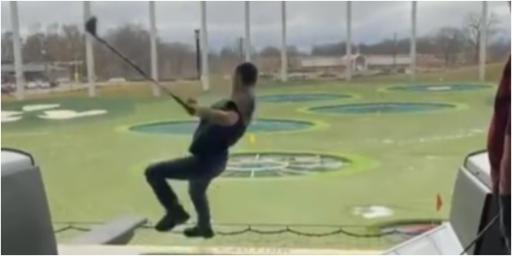 Topgolf, from time to time every day is filled with people trying to bomb it and do their best Happy Gilmore impression.

We've also seen Rory McIlroy nuke one down the range there and even Bryson DeChambeau send one to the moon.

Even Justin Timberlake has spent time at the popular site for golfers.

This one? Well, let's just say our protagonist definitely gave it his full effort and gets a maximum score for the landing.

Though it has to be said: is this even real or is it staged?

Related: Topgolf user kicked out for falling into the nets with a beer

As you can see from the four second clip, posted by the Instagram user @_jpappps, it's an interesting approach.

The player decides to simply go for it leaving, nothing in the tank and taking an almighty swipe at the ball.

Those who are there with him let out astonished cries as he sails into the nets.

He's dangerously close to going straight over the net.

Was it staged? More than likely. Still, full marks for effort if it was.

"Stop filming me without my permission"

"Not many would risk that for a video. Long way down past the net..."

"Gotta be staged. No other reason you'd put the ball that way far down."

"That's gotta be the dumbest stunt I've ever seen"

Watch Bryson Dechambeau send one to the stars