In one of the least surprising things you'll see, this video ends exactly as you would expect. But is it even real? 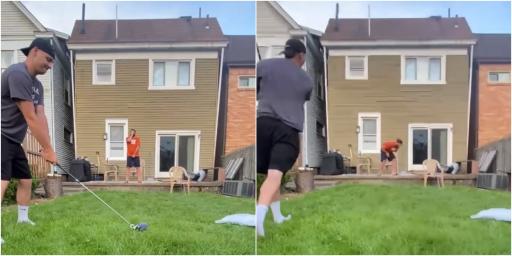 Sometimes we watch viral golf videos that beggar belief: this is absolutely one of them.

This is probably the most painful and most stupid video you'll see for a long time.

It features two men standing in a back garden. One man has a driver in his hand a ball teed up. The other? Bracing for impact.

Just why exactly they decided to do this is beyond belief. As you can imagine, it went exactly as you would expect.

Watch: Is this the biggest driver you have ever seen?

Suffice to say, that hit him precisely where you were thinking it would. Perhaps he's damaged his parenthood capabilities with that.

A few people in the comments section have cast doubt over whether that was a real golf ball. Well, it certainly sounded like it.

"That can't be a regular golf ball, it just can't"

"And this is why women live longer than men"