WATCH: This old clip of Seve Ballesteros will make your heart ache

Golf fans shared clips of golf great Seve Ballesteros to mark the 11th anniversary of his death. This one will make you miss him even more. 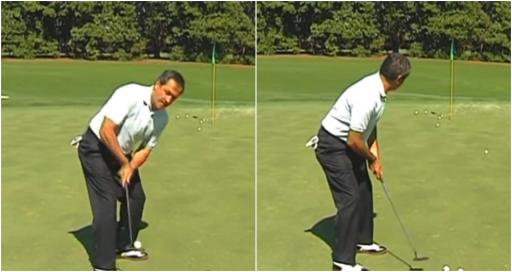 Only one thing is certain in this life. We will all meet our maker and Seve Ballesteros left us far too early.

Last week marked the 11th anniversary of the death of the golf icon, who died on 7 May 2011 aged 54 after being diagnosed with cancer.

As such, there were lots of videos and stories being shared that involved one of the game's most gifted and charismatic players.

You are sure to have seen the clip of Ballesteros asking a fan to stay still. "I know you are nervous, but I am too," he says footage.

Another one has been doing the rounds, too, and it involves Ballesteros using a 3-iron to hit shots nobody else could ever play as well as him.

He uses the club to hit shots out of the bunker, over the bunker, ably demonstrating his incredible touch and feel.

In the clip, Seve also decides to use his putter and showed us how he could skip one ball over another. True wizardry.

Towards the end of the clip, Ballesteros is using the back of his putter to flip the ball over his head to drain a putt from about 40 feet. Of course he makes one.

Then he leaves us with this: "So why we need those lofty sand wedges, 60, 62 degrees?

"Here we have a 3-iron, and I can show you that it's possible to chip and pitch. So that's why I keep saying that the R&A and the USGA, they must look for the rules and change because otherwise the game becomes too easy for those pros out there. So think about that."

By the end of the video, it just makes you miss him that much more.

The control Seve gets with a 3 iron out of a bunker is pure sorcery pic.twitter.com/68DgaExx1C

Features
A trip down memory lane: 5 of the most ICONIC player/caddie partnerships ever
Golf news
R&A to celebrate the life of Seve Ballesteros with new exhibition and film
Ryder Cup
From Brookline to the Miracle at Medinah: The top FIVE Ryder Cups of all time
Ryder Cup
Ryder Cup 2021: Ian Poulter says Team Europe have MAGIC SAUCE to deliver victory
Ryder Cup
Ryder Cup: Top FIVE players who famously missed out