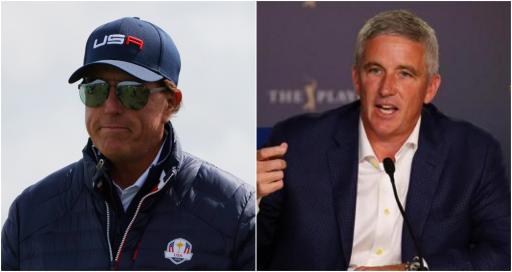 Greg Norman has hit out at the PGA Tour over its decision to refuse players releases to participate in the first LIV Golf Invitational Series event at Centurion Club next month.

In an extraordinary post, Norman has described the PGA Tour's decision as "anti-golfer, anti-fan and anti-competitive", but he added: "But no matter what obstacles the PGA Tour puts in our way, we will not be stopped".

Late last night news broke that the PGA Tour commissioner, Jay Monahan, had decided not to grant releases to players such as Sergio Garcia, Phil Mickelson and Lee Westwood so they could play in the first Saudi-backed rebel league event per a memo.

You can read that memo here:

The letter sent from the Tour to players who applied for releases. pic.twitter.com/ZVYUTDnNdp

It was widely expected that releases would be granted for the first tournament but be denied for the second in the eight-event series because it is being held in the United States.

The global, eight-event series sees a total prize purse of $255million being given out. Players will compete in teams in a 54-hole event format with the winner taking home $4million.

The Saudi International is now sanctioned by the Asian Tour. That tour receives money from Saudi Arabia's Public Investment Fund, which is also bankrolling the LIV Golf Series.

The rebel league is seen as a huge rival to the PGA Tour/DP World Tour. Norman also said that he has been given an extra $2billion in funding from the Saudis to build the series.

Both the PGA Tour and DP World Tour have formed a "strategic alliance" to try and fend off the threats of rival leagues.

"Sadly, the PGA Tour seems intent on denying professional golfers their right to play golf, unless it’s exclusively in a PGA Tour tournament.

"This is particularly disappointing in light of the Tour’s non-profit status, where its mission is purportedly ‘to promote the common interests of professional tournament golfers.’

"Instead, the Tour is intent on perpetuating its illegal monopoly of what should be a free and open market. The Tour’s action is anti-golfer, anti-fan, and anti-competitive.

"But no matter what obstacles the PGA Tour puts in our way, we will not be stopped. We will continue to give players options that promote the great game of golf globally."