Has Adam Scott just slammed the door on LIV Golf for 2023? 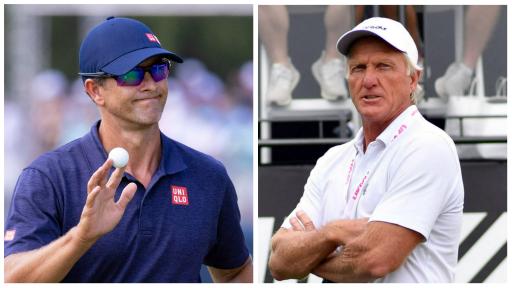 LIV Golf target Adam Scott has seemingly shut the door on a move to the Saudi-bankrolled circuit in 2023 after heaping praise on the new PGA Tour schedule.

In an interview with Eurosport during this week's Australian PGA Championship, Scott, now 42, has revealed he will be basing himself primarily in the United States next year in a bid to "compete seriously" on the PGA Tour.

"I don’t live in the States, but I’m going to spend way more time in the States next year to compete seriously.
"I can’t be flying all around the world playing against guys who don’t."

Scott has won 14 times on the PGA Tour through the years, with his last victory coming at the 2020 Genesis Invitational hosted by Tiger Woods.

He ranks fifth in the all-time money list earnings on the PGA Tour with just under $60 million.

The Australian, who won the 2013 Masters, is also still intent on joining golf's elite and completing the career Grand Slam with three more victories at The Open, US Open and US PGA Championship.

"I guess I want to win all the majors, and that sounds like a lot, but really it’s three more events. It’s just got to be the right week. I have all the tools. I’m still very healthy. I’m still moving the golf ball well and I have a lot of experience, and I’m just trying to put it all together.
"I want to fulfil my dreams and goals as a player and time is less on my side now. I have to do everything I can to make sure I give myself the best chance. I still haven’t achieved all the things I want to achieve in my own career."

Despite being heavily linked with a move to the breakaway LIV Golf League, led by his compatriot Greg Norman, it would seem that Scott is not yet ready to make such a move.

Scott believes there has never been a better time for golfers to make a living on the PGA Tour, especially following the recent changes that have been made to the circuit.

"I'm interested to see how [the schedule] will play out, how it'll be received when it's happening, by the players and by television.
"I don't know that there's ever been a better time to be a member of the PGA Tour because all of a sudden there are these 13 elevated events that are at least double the money we've ever played for."

Scott, who has been heavily linked with a move to join Cameron Smith's all-Australian LIV Golf team in 2023, recently earned a $3 million bonus for finishing 17th in the PGA Tour Player Impact Program (PIP).

See the official results for that here.

Scott is competing in the Australian PGA Championship this week and he has his former caddie Steve Williams once again back on his bag.

Williams of course was also on the bag for Woods for many years back in the day.

Scott is six shots off the pace in tied 17th.