Graeme McDowell says he does not care what Twitter says about him or LIV Golf because "they're a bunch of idiots". 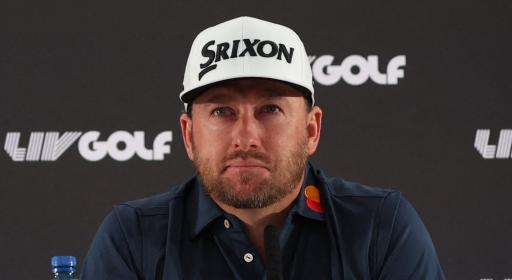 Graeme McDowell says he does not care what the Twitter world has to say about him or LIV Golf because "they're a bunch of idiots."

McDowell celebrated his 42nd birthday during the second round of the LIV Golf Invitational Bedminster tournament where he lies a lowly tied 35th on 5-over par with one round to play on Sunday.

The Northern Irishman still thinks he has made the right decision for his golf career to join the Saudi-funded LIV Golf Invitational Series and he does not believe he and his colleagues deserve the heavy criticism they have all faced since breaking away from the DP World Tour and PGA Tour.

"Yeah, it still bothers me because I’m not disciplined enough to stay off my social media," said McDowell after his second-round 74 at Trump National Bedminster GC.

"Haters are gonna hate. Keyboard warriors are always going to be there and that is what it is. I’m not used to it. And like I said, I haven’t done a good job staying away from it."

"I care more about what (the media) think than I care about what the Twitter world thinks, because I know they’re a bunch of idiots," added McDowell.

"But I know the people writing up on me are a bunch of smart people at times, so that stuff hurts more. But again, it’s only opinion sometimes. It’s not facts. It’s just opinion.

“It’s been hard. It’s been a hard couple months, but I really believed in London I was in the right place. That opinion has only strengthened now the last six weeks.

"We’re kind of brothers in arms, if you like, because of the negativity that’s come out against us all. Everyone’s experienced that in their own way and it brings us all closer together.

"But I’m getting better. I’m coming through. I’m very happy where I am. I think this tour is only going to go from strength to strength."