Henrik Stenson will take a three shot lead into the final round of the LIV Golf Invitational in Bedminster, New Jersey, at Trump National. 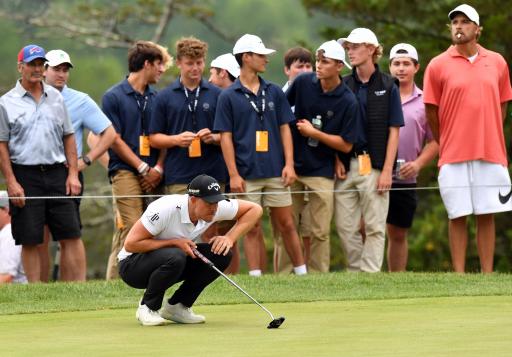 Henrik Stenson will take a three shot lead into the final round of the LIV Golf Invitational in Bedminster at Trump National.

The Swede, 46, is making his debut for the controversial circuit this week after he was stripped of the Ryder Cup Europe captaincy.

David Feherty, the famed on-course commentator who is also calling the action for the first time, described this decision as "bitter" and "mean".

If Stenson has been bothered by the off-course noise then he is certainly not showing it, carding a second round of 69 in windy conditions.

His round was entertaining, containing one eagle, a double bogey, four birdies and two bogeys.

The 2016 Open winner leads Dustin Johnson. The American, 38, is looking for his first victory after leaving the PGA Tour.

The first two winners of the Saudi-backed circuit were won by the South African players Charl Schwartzel and Branden Grace.

Patrick Reed, who is part of Johnson's "4 Aces" team, is one stroke further adrift. Captain America is tied for third with Talor Gooch and Carlos Ortiz.

Lee Westwood and Martin Kaymer are also inside the top-10. Golf continues to be a struggle for Phil Mickelson.

After 36 holes, Lefty is 6-over par. He followed his opening 75 with a 73, logging three birdies and two bogeys.

Graeme McDowell celebrated his birthday today. He has shot 73-75 and sits in T-35 in the 48-man field.

The winner will pick up a check for $4million.

Earlier in the week, LIV Golf Investments chief executive Greg Norman spoke of how he would be open to peace talks with the PGA Tour.

Read more here what he had to say about that.