How much is Phil Mickelson being paid by LIV Golf Investments?

Phil Mickelson has reportedly already accepted a huge fee to play the entire series of the LIV Golf Invitational Series. 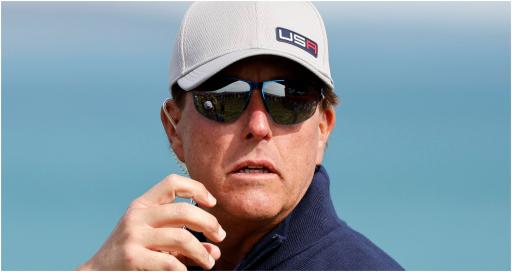 Phil Mickelson has already accepted a lump sum of £24million to play the entire series of the rebel Saudi-backed golf league, according to a report by James Corrigan of The Telegraph.

Earlier in the week Mickelson's agent Steve Loy confirmed that his client had asked the PGA Tour for permission to play the first event of the LIV Golf Invitational Series in June at Centurion Club.

Loy also confirmed that Lefty was registered to play the U.S. Open and the PGA Championship. Mickelson became the oldest man to win a major last year at Kiawah Island when he held off Brooks Koepka.

But this report suggests that Mickelson's immediate future with the PGA Tour is under a cloud. Corrigan's report states that players joining Mickelson include Sergio Garcia, Ian Poulter, Lee Westwood and Louis Oosthuizen.

"Any actions taken are in no way a reflection of a final decision made," Loy said, "but rather to keep all options open."

However if Mickelson were to do this then the PGA Tour would likely be ban him, leading to an inevitable court battle about the legality of that decision.

The PGA Tour bylaws indicate that no players competing in their Tour can participate in North American tournaments run by rival organisations, in this case the LIV Golf International Series.

Corrigan's report states: "Fears are growing in the game's corridors of power that Phil Mickelson has already signed up to play in all eight events of the LIV Golf Invitational Series and that it will be the 51-year-old who will be the face of the likely court battle if and when the PGA Tour issues bans."

If Mickelson were to not appear in all eight of the tournaments then he almost certainly would have to pay back a percentage of his fee.

Most recently Jon Rahm has come out in defence of Mickelson, saying that he hoped the comments he made about the PGA Tour and his alleged conduct wouldn't tarnish his legacy.

Mickelson has not posted any update on his social media channels since 22 February when he announced he was taking a break from the game.

But he is nearing a return, and it could be explosive.

The LIV Golf Invitational series features eight tournaments globally with a $25million prize purse for each.

There are no cuts and each player competing is guaranteed a pay day.

The players who take part are alleged to have been offered six-figure appearance figures.