Lee Westwood has blasted the changes announced by the PGA Tour, claiming he hopes players "choke on their words" due to the criticism LIV Golf faced. 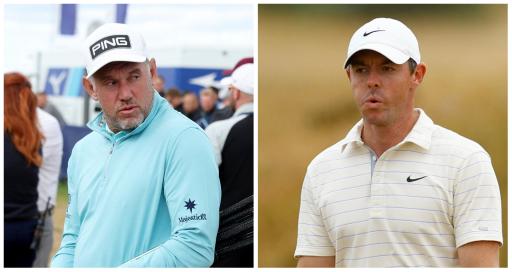 Former World No.1 and LIV Golf Invitational Series player Lee Westwood says he "laughs" at the changes the "bullying" PGA Tour have announced, claiming they are just copying the series fronted by Greg Norman.

In an interview with John Huggan of Golf Digest, the 49-year-old Englishman has opened up further on his decision to join LIV, what he makes of the changes to the Official World Golf Ranking, the dramatic changes announced by the PGA Tour, and why he's not convinced of the "strategic alliance" between the established American circuit and the DP World Tour.

Westwood was one of the first players to confirm his long-assumed interest in the series way back in February. Since then, he has played in three LIV Golf events and been on the receiving end of vitriol due to accusations of sportswashing. He was also accused of turning his back on Ryder Cup Europe.

You might remember Westwood and Ian Poulter were involved in a tense exchange before the first LIV Golf event at Centurion Club way back in June as Phil Mickelson returned to the spotlight. Both players were asked if there was anywhere in the world they wouldn't play golf on a moral basis.

Westwood admits his response to these questions is "to not answer them". "I'm a golfer," he said. Now he's really gone after the PGA Tour. He claims that some people may view him as cynical, but the way he sees it is that he's just "seeing through all the bulls***".

In light of the changes announced, Westwood told Huggan: "I laugh at what the PGA Tour players have come up with. It's just a copy of what LIV is doing. There are a lot of hypocrites out there. They all say LIV is 'not competitive.'

"They all point at the no-cut aspect of LIV and the 'short fields.' Now, funnily enough, they are proposing 20 events that look a lot like LIV. Hopefully, at some point they will all choke on their words. And hopefully, they will be held to account as we were in the early days."

The DP World Tour previously strengthened their alliance with the PGA Tour when they announced LIV players were fined £100,000 and banned for three co-sanctioned events after the first event at Centurion Club.

It led to accusations by some that the former European Tour would be relegated even further down the pecking order and become a feeder tour for the PGA.

Westwood added: "I'm not convinced by the strategic alliance because I've seen how the PGA Tour has behaved over the years.

"There's not been much 'give.' They have always been bullies and now they are getting their comeuppance. All the PGA Tour has done since Tiger came on tour is up the prize purses.

"In turn, that has taken all the best players from Europe away from the European Tour. They've had to play in the States, taking all their world ranking points with them.

"That was their strategy: 'Put up the money. Get all the players. Hog all the world ranking points.' Which becomes self-perpetuating. What we have seen over the last few months is just LIV doing what the PGA Tour has done for the last 25 years."

He added: "Back in 2000 it was mooted that there should be more WGC events around the world.

"So what did they do with the World Match Play? They stuck it early in the new year in Australia. Who was going to go then? Not many Americans. So then they turned round and said they just couldn’t get a field.

"But that was by design. If you hold an event in Australia at that time of year you are never going to get much of a field. They have used tactics like that all along. Some may say I am cynical, but all I am doing is seeing through all the bullsh**."

Next page: LIV Golf want Tiger and Rory under oath about player meeting