At least six DP World Tour pros have reportedly applied for permission to play in the curtain-raising Saudi rebel tour event at Centurion. 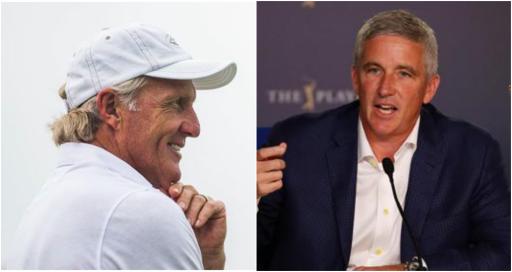 The PGA Tour and DP World Tour are set to receive a number of requests from their players looking to peg it up at the curtain-raising event on the Saudi rebel tour.

According to a report by James Corrigan of The Daily Telegraph, at least six DP World Tour pros have already sought permission to play the LIV Golf Invitational at Centurion.

Over the weekend it emerged that PGA Tour journeyman Robert Garrigus, who has won once on the PGA Tour, had become the first player to apply for a waiver to compete.

Greg Norman is the CEO of LIV Golf Investments and earlier this year announced that a series of eight events with a prize purse of $255million will be taking place.

The Great White Shark has also teased that a former World No.1 and major winners were ready to sign up to the LIV Golf Invitational Series.

Currently, the PGA Tour regulations stipulate that players have up to 45 days before an event to apply. The European circuit has a 30 day cut-off period.

The DP World Tour and PGA Tour previously announced the formation of a "strategic alliance" in a bid to try and pour cold water on the threats of breakaway leagues.

They are expected to form a united front on granting waivers. Earlier this year, the PGA Tour granted waivers for several leading pros to participate in the Saudi International.

That event conflicted with the AT&T Pebble Beach Pro-Am and players were granted waivers on a set of conditions that included supporting that tournament going forward.

The Saudi International was previously an event sanctioned by the European Tour, but now it falls under the umbrella of the Asian Tour (also bankrolled by the Saudis).

The Telegraph report that waivers will be granted for the first event at Centurion Club in June providing they are not too numerous.

However, the second event on the LIV Golf Invitational Series is being held in Portland, Oregon, and under the PGA Tour rules it is forbidden for releases to be granted for conflicting events being staged in North America.

Corrigan's report quotes an insider: "Jay's hands will be tied. He cannot permit members to play in that event or any of the four in the eight-event series taking place in the US. Portland is when it could get really messy and when the lawyers will get involved."