Robert Garrigus has reportedly become the first PGA Tour player to ask for a waiver to compete at the LIV Golf Invitational at Centurion. 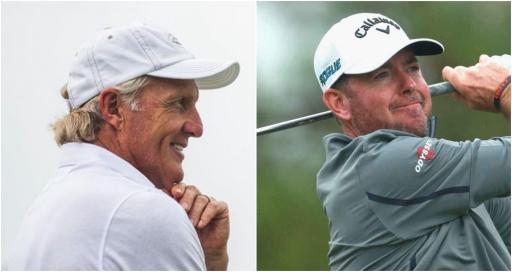 A journeyman on the PGA Tour has reportedly become the first player to apply for permission to compete in the Saudi-backed rival league.

As first reported by Golfweek citing sources familiar with the matter, Robert Garrigus has become the first PGA Tour player to apply for a waiver to play.

He has one win on the tour out of 362 starts. That lone win came at the Children's Miracle Network Classic in 2010.

Golfweek has reported that multiple sources have confirmed that Garrigus has requested to play the LIV Golf Invitational at Centurion Club in June.

It is the inaugral event of eight tournaments scheduled this year for LIV Golf, the group led by Greg Norman that is financed by the Saudi government's Public Investment Fund.

PGA Tour players need to ask for waivers to compete in "outside events". The tour has threatened to ban players who take part in this series.

Earlier in the year, the tour did grant waivers so players like Dustin Johnson could compete at the Saudi International.

That tournament was previously sanctioned by the DP World Tour but it is not anymore after the European Tour formed an alliance with the American tour.

Players were granted waivers to play the Saudi International - part of the Asian Tour now - on the condition they support the AT&T Pro-Am at Pebble Beach going forward.

Golfweek say no other player has applied for a waiver. They say the PGA Tour and the representative of Garrigus declined to comment.

Garrigus is playing the Zurich Classic this week and is partnering Tommy Gainey. He has played 13 seasons of 20 or more events.

His best finish so far came when he finished T-16 at Pebble Beach.

He hit the headlines in 2019 when he served a three-month ban for marijuana use.

There are several high-profile players who are rumoured to be on the verge of signing up to take part in the series.