"Yet Phil Mickelson gets cancelled, WTF!" Is Lefty back on social media?! 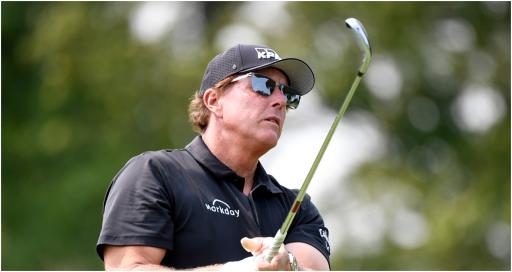 If reports are to be believed, Phil Mickelson may be nearing a return to golf.

Though the PGA Tour's decision to deny players who had requested releases for the first Saudi-backed rebel league event may change that.

Mickelson, like Lee Westwood, Sergio Garcia, Richard Bland and Martin Kaymer wanted to peg it up at Centurion Club next month.

Per a memo released to players, the PGA Tour's commissioner, Jay Monahan, has refused players waivers to play in the first LIV Golf event.

Of course, players can opt to ignore the PGA Tour's decision, though they would be subject to disciplinary action.

Monahan has previously threaten to ban players if they participate in any rival league.

Last night marked the beginning of what could be a messy, drawn out process that surely ends up in a court room.

When Mickelson went into self-imposed exile late February, he was described by Bryson DeChambeau as "gone dark".

"There's been no contact," DeChambeau, 28, told the media at his press conference before the 86th Masters.

There were rumours that Mickelson had made for a bolt hole in Montana and grew a ZZ Top beard.

Mickelson reportedly was sneaking into Callaway performance centres to practice, too.

Last night, as the news broke about the PGA Tour's decision to deny releases, there was activity on Mickelson's Twitter account again.

The last time it was active was 22 February when he released his statement saying sorry and stepping away from the game.

Mickelson's account "liked" this post. A user wrote "Yet Phil Mickelson gets cancelled, WTF!" in response to a news article about the NBA hosting games in the United Arab Emirates.

The UAE also has more than a questionable human rights record. Homosexuality there is punishable by death.

Mickelson's account also liked a news story, from Yahoo, about the PGA Tour's decision to refuse these waivers.

It's obviously not clear if this was Mickelson himself on the account or one of his team.

He has previously said he handles all of his own social media and described himself as a "smart aleck" in that regard.

Lefty, 51, is in the final field for the forthcoming PGA Championship at Southern Hills alongside Tiger Woods.

Waugh did say, however, that Mickelson would have to face the media but he hoped it wouldn't be a "circus".