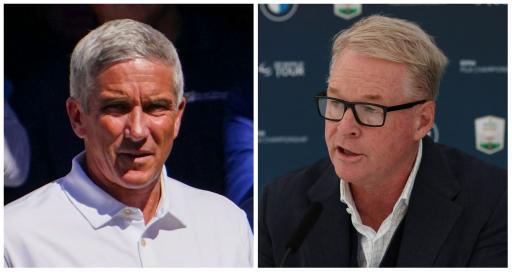 When the LIV Golf League emerged in 2022, one big prediction was the real battle would not take place in court but in a small room in Virginia Water, Surrey.

That, reader, is the headquarters of the Official World Golf Ranking (OWGR).

You'll likely know by now that LIV Golf are without OWGR accreditation and therefore their players are unable to earn points to qualify for golf's four major championships.

This is one of Greg Norman's gripes. He has called for the OWGR to be "Switzerland" in this regard and let the majors stand alone.

Critics and naysayers will argue that one of the reasons why LIV players were paid dizzying sums of money to join the breakaway tour was because of the lack of clarity in this regard.

This is an argument that has already been made and will likely never end.

If you didn't know, the commissioner of the PGA Tour, Jay Monahan, and the chief executive of the DP World Tour, Keith Pelley, sit on the board of the OWGR and vote on whether golf tours can gain accreditation.

It's not exactly outrageous to suggest there is a clear conflict of interest here, given the ongoing legal battles.

LIV have applied for OWGR accreditation. Before they played their $25m invitational in Jeddah, the breakaway tour had the confidence they had acquired world ranking points via a partnership with the MENA Tour.

Norman's enterprise trolled the PGA Tour and DP World Tour by describing their partnership as a "strategic alliance".

But such confidence was short-lived and the OWGR confirmed they would review their application and partnership with the MENA Tour.

Now it has been confirmed that after taking legal advice, both Monahan and Pelley have both recused themselves from voting on LIV's application.

Pelley - who claimed a LIV Golf League player "upset staff" during the Abu Dhabi HSBC Championship - claims to not have even seen LIV's application.

Also joining Monahan and Pelley in abstaining from the vote is Keith Waters, who represents the International Federation of PGA Tours.

Now the issue of resolving LIV's battle for world ranking points is left in the hands of representatives from Augusta National, the R&A, PGA of America and USGA.

LIV players have been handed boosts in recent months as it was confirmed those who have already qualified for the 2023 Masters would not be prohibited from teeing it up in April.

R&A chief executive Martin Slumbers who confirmed a LIV decision would be made in "early 2023" but revealed he was looking forward to welcoming LIV's marquee signing and reigning Open champion, Cameron Smith, to Royal Liverpool.

Whether or not this will be resolved soon remains to be seen, but watch this space!

Who is on the OWGR board?