Report: LIV Golf players being told "we're going to own the PGA Tour"

LIV Golf players are reportedly being told they will one day "own" the PGA Tour and their strategy is not to co-exist, according to Davis Love III. 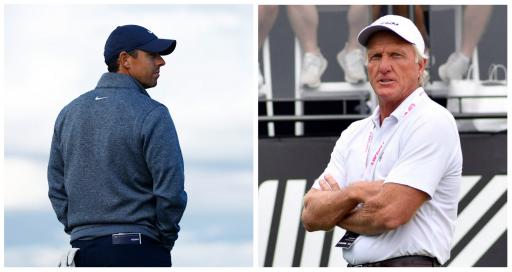 Davis Love III has made absolutely no secret of what he thinks of LIV Golf as it goes to battle in the courts with the PGA Tour.

He's hinted at mass boycotts from PGA Tour players if the LIV players are allowed back on the Tour. This was before the antitrust lawsuit was filed.

Love, twice a Ryder Cup captain, has also said he will not be picking any of the "rebels" for his Presidents Cup team.

He's given a further interview with the No Laying Up podcast, which you can listen to by clicking here.

The 58-year-old, who has won 21 times on the PGA Tour, has explained why he is sticking his neck out "more than anybody else has seen me".

Love claims that the intentions of LIV Golf are not sincere. He claims LIV do not want to co-exist, which is at odds with what LIV chief executive Greg Norman has previously said.

Norman, who has recently responded to Rory McIlroy's famous chide after he claimed the RBC Canadian Open earlier in the season, has consistently said that LIV Golf is "for the good of the game."

Love doesn't see it that way.

"Their strategy is not to co-exist..."

Love told the podcast: "We can't sit down with guys that are wanting to compete against our model, because they don't want — if they were saying, hey, we just want to get along, we'll play outside the United States, how can we make this system work.

"Greg Norman flat-out will say … we want to shake up the golf world, we want to take over. And behind the scenes, they're saying to players, we're going to own the PGA Tour. You will see going forward in this Tour case, you know, their strategy is not to co-exist.

"So to your question before: Could the Tour see it coming, yeah, they've seen the real intentions coming for a long time, a lot clearer than me.

"Well, why wouldn't we defend it? I don't think we should sit down with them, especially not with [LIV CEO] Greg Norman."

Love continued: "I'm not saying the PGA Tour does everything right.

"But somebody has to defend our rights and what's right for the game, and good for the game is a great term.

"So am I sticking my neck out more than anybody's ever seen me? Yeah, because I want to — Tiger can't say what he thinks sometimes and can't stick his neck out. I can stick my neck out. I can't get hurt in this. But yes, I'm giving back. I've been blessed. …

"I'm defending the process that I know works. So if I overstep, Jay [Monahan, Tour commissioner] will tell me I've overstepped. It's kind of like being in the Army or the Marines — I'm protecting my people as much as I can."

Next page: Why the PGA Tour have not suspended Cameron Smith