Bryson DeChambeau rope incident goes viral, and receives some WWE commentary to go alongside it... 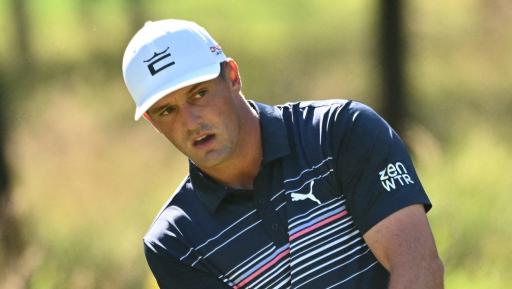 Bryson DeChambeau's unfortunate rope incident at LIV Golf Chicago on Sunday has now received some classic WWE commentary from Jim Ross and Jerry Lawler by a user on social media.

Ross and Lawler are famous wrestling commentators for those none the wiser, and the clip was posted on Twitter by @ChadBlue83.

"What the f*** guys," LIV Golf's DeChambeau could be heard saying after the rope caught him in the face.

@NoLayingUp possibly the funniest and most dramatic thing I’ve ever seen on a golf course. Bryson vs a gallery rope. Wow! pic.twitter.com/ayRrwQ2Qrq

DeChambeau got up and went on to finish 6-under par in a tie for eighth, earning him just over half a million.

Some more videos of the incident have since come to light and they have been posted to Twitter.

DeChambeau's caddie Brian Zeigler offered his man a towel while he was kneeling to the ground in discomfort.

Bryson then grabs the towel while raging 's***'.

Hey @SharkGregNorman you better do something about these unruly gallery ropes. Players’ lives are in danger. We have lost control of the ropes. pic.twitter.com/FMh4wjVCQS

Interestingly, if you watch the clip back again, you can actually see Zeigler is the one who lifts the rope up just before it pings into DeChambeau's face.

Bryson is tough as nails pic.twitter.com/Ak1pvo9xam

"As we know, golfers get a reputation of being 'soft' and Bryson DeChambeau proved everyone wrong.

"After a wayward, wayward drive, he was coming from the crowd back into the golf course at a staggering 1 mph.

"The spectator rope came out of nowhere and almost decapitated him, blinded him, caught him in the face. He fell to the ground. 'I can't see, I can't see'.

"You know what Bryson did? He said 'I'm going to persevere'. He got right up, he finished his round, and he proved golfers are tough as nails.

"Thanks for being an inspiration, Bryson."

Next Page: Pat Perez mocks himself over lack of team contribution on LIV Golf Tour