Scottie Scheffler ahead of The Open: "I assume nobody's picking me to win"

Scottie Scheffler spoke to the media ahead of the 150th Open at St. Andrews to discuss his chances of winning the major. 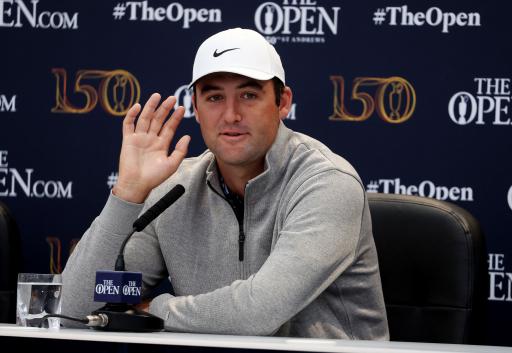 Scottie Scheffler says he “assumes” people aren’t picking him as one of the favourites to win the 150th Open at St. Andrews.

Scheffler, 25, spoke to the media this morning ahead of the landmark major. The Masters champion will play his first two rounds at The Home of Golf alongside Joaquin Niemann and Tyrrell Hatton.

The American said that despite being number one in the world, he doesn’t necessarily believe that he is perceived as the best. “I don’t feel like there’s any extra attention on me,” he admitted.

Scheffler, the World No. 1, flew under the radar on Thursday and Friday at Augusta National before taking full control of the tournament over the weekend.

And even though he won twice before playing in Georgia, he wasn’t tipped as a big favourite. Of course, the pressure was firmly on the shoulders of the likes of Rory McIlroy.

Scheffler is coming into The Open off the back of another impressive performance in a major. At The Country Club at Brookline, he finished in a tie for second place as Matt Fitzpatrick claimed the U.S. Open.

Strangely, he missed the cut at the PGA Championship.

Asked to explain what he meant by “not being perceived” as the best player in the world, Scheffler said: “I don't feel like there's any extra attention on me.

“I haven't read much, but I would assume not everybody's picking me to win this week, just stuff like that.

“That may not be the true perception. That's just mine, but I don't read a ton of stuff. So, for me I don't really feel like whatever being No. 1 would be.”

More: OWGR for LIV Golf to be discussed at The Open

Scheffler admitted that he tends to stay away from social media.

If things are being written about him that are positive, he doesn’t want to come into events overconfident thinking “I’m the guy”.

On the other hand, he doesn’t appreciate the negativity.

Scheffler explained about social media: “I'm not saying you all write bad stuff about me or whoever it is, but your job is to write storeys and be critical.

“That's something you have to do. So, for me, having any extra noise inside my head, whether it be from people on social media saying, oh, maybe his swing stinks or whatever it is.

“I don't even know because I don't read it.

“For me, there's no point to it because I'm either going to get too high or too low. If I get on social media or if I start reading articles and everybody's like, hey, man, Scottie's the guy to beat this week. “He's playing great golf even though I missed the cut last week. No. 1 in the world, yada, yada, yada. I'm going to show up here like, oh, I'm the guy. Nobody's going to beat me this week.

“For me, just staying away from all that stuff and just showing up and doing my thing is always what's worked best. Keeping the noise out is optimal.”

Scheffler admitted the key to success here is avoiding the bunkers.

Tiger Woods famously avoided them all for 72 holes when he won here in 2000.

“I still haven’t figured out how quite how he did that,” Scheffler said.

“To be able to have a chance to win on Sunday would be special as well.

“So, I'm going to go out there tomorrow and do my best and put my head down and do what I've done all year and just go out and try to play good golf.”