Bryson DeChambeau on Koepka: "It's DISGUSTING how he has tried to knock me down"

From "forced hugs" at the Ryder Cup to how their beef started, these two are trading barbs like heavyweight boxers. 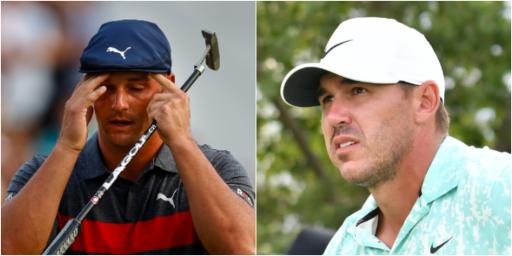 We're only a few days away from Brooks Koepka and Bryson DeChambeau settling their beef.

Over 12-holes at The Wynn Golf Club in Las Vegas, the two will peg it up for the fifth edition of The Match.

The knife will be twisted. Comments will be made. Bombs will be hit. Putts sank.

Of course, we know the reality of the situation: it's all a big PR spin. Well, for the most part it is.

There was/is genuine dislike there. It all started with slow play and appeared to reach the height of controversy with that Koepka expression.

Then the two played in the Ryder Cup and hugged it out at one of the funniest press conferences we have ever seen.

DeChambeau and Koepka have been speaking to the media this week in the build-up to their showdown.

And they both had interesting things to say.

"It was definitely a little forced," DeChambeau, 28, told GolfDigest.

"The team wanted us to do it, and to be honest I was surprised he did it.

"But I'm a guy that can put things behind me pretty quickly when you apologize and then we can move along.

"But it definitely felt forced, there wasn't an apology or anything like that.

"Until I get an apology for what he's said and what not, nothing will change."

DeChambeau further told the publication: "This is all real on my end.

"It's disgusting the way the guy has tried to knock me down.

"There's no need for it in the game of golf, he's just tried to knock me down at every angle, every avenue.

"For what reason, I don't know. Maybe it's because he's jealous and wants to get a part of that PIP money from the tour.

"That's probably a part of it, because it was squashed until that was announced."

Koepka also waded in with some interesting comments.

The 31-year-old will be all kitted out in Cleveland/Srixon gear in Las Vegas after signing with the brand this week.

"I've never really liked him. I think we played together maybe when he was an amateur at Augusta, that was the only time that I can think of that we ever played.

"Just come to me. Don't be a little baby about it. I think he's learned his lesson."

Despite these comments from the pair about each other, there is some respect there.

Will this be settled once and for all?