The Australian won on the PGA Tour for the first time as he battled the elements in Bermuda. 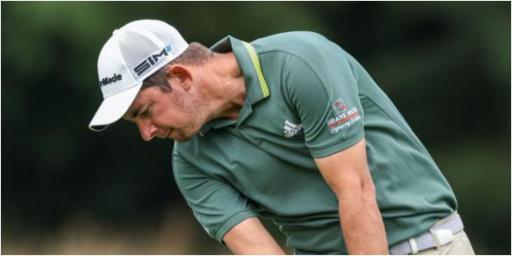 Australia's Lucas Herbert held off the brutal conditions and a strong challenge from Patrick Reed to claim his first PGA Tour win.

Herbert battled the elements all day at the Butterfield Bermuda Championship at Port Royal Golf Club and won by one stroke.

Reed charged up the field on Sunday and posted 6-under while the overnight leaders threw away shots.

But Herbert managed to keep his cool and signed for a final day 69 to reach 15-under par in the howling wind and rain.

MORE: THIS KID NAILED HIS TIGER WOODS OUTFIT FOR HALLOWEEN

Herbert, 25, has won twice on the European Tour.

Those wins came at the 2020 Omega Dubai Desert Classic when he won in a playoff against South Africa's Christiaan Bezuidenhout.

Herbert opened his championship with a 1-under 70 and fired two solid rounds of 65 on Friday and Saturday.

Despite the weather he managed to keep his cool down the stretch.

He fired an absolute dart with his approach at 18 to ease the nerves.

Reed put in a simply stunning performance on Sunday in the horrific conditions.

Players had to take shelter and kneel down holding onto their umbrellas as the wind and rain took its toll.

It forced a suspension in play as the high, gusting winds and rain made conditions absolutely brutal.

The @Bermuda_Champ has been suspended due to inclement weather. ☔️

Check the Weather Hub presented by @Travelers for the latest.

This did not seem to matter for Reed, though, who made the turn in 2-under par in Port Royal.

He only had one blemish on his front nine and on the back made the charge as the leaders threw away shots.

A highlight of Reed's round included an absolute monster putt he drained at the par-4 13th.

Before the Ryder Cup Reed revealed he battled a bout of life-threatening pneumonia.

It looked like he was going to take a while to get back into the swing of things.

But this week he showed the world just how good he is and why he is a Masters champion.

Earlier in the week he sent one of his tee shots into the penalty area and then holed out for eagle with a sensational strike.

He tipped his hat to the crowd, smiled and walked off.

Elsewhere, the United States' Scott Stallings had the round of the day shooting 9-under in the appalling conditions.

His 62 saw him reach 12-under having shot 3-over par in his first round.

Stallings made four birdies heading out and five more on the back nine.

A first-time winner on TOUR.

Canada's Taylor Pendrith was primed for a memorable win after he shot a course record 61 on Friday.

But he fell by the wayside and dropped three consecutive shots on the front nine.

A hammer blow double bogey followed on the back nine to end his hopes.

But he ensured he kept his Tour status for next year as he has been playing on a medical exemption.

MORE: WHAT WE KNOW ABOUT THE SAUDI ARABIA GOLF SERIES

MORE: FITNESS MODEL CHIPS IN VIA A PUMPKIN