Canelo Alvarez, the champion boxer, almost got a hole-in-one at Pebble Beach during the AT&T Pebble Beach Pro-Am. 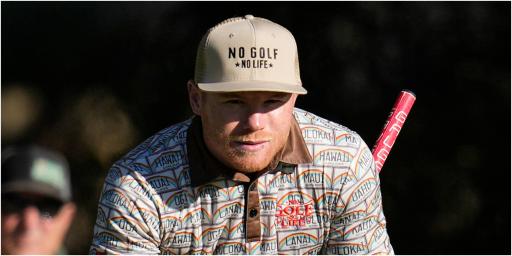 Canelo Alvarez may spend the majority of his time knocking out boxers but he can also knock down his irons.

The champion boxer showcased his ridiculously good golf swing at the AT&T Pebble Beach Pro-Am with this fine shot.

He explained before he hit his tee shot that he's got so good at golf by practising for at least four hours a day around his boxing training.

Well, to be as good as he is at his craft he no doubt has the discipline, so he's capable of putting in the work on his game.

WHAT A SHOT FROM @Canelo

He's the Round 5 leader that's heading to the Final. pic.twitter.com/SbiYh7lOcO

"It's the only way to get better," Alvarez says, who pretty much seems to be good at everything he does.

His swing is pure and the tempo is good. He makes crisp contact with the ball and sends it high into the sky.

The ball lands over the pin and rips back. "Keep coming," Jim Nantz yells before the ball stops all but a few inches away from an ace.

Making a hole-in-one must feel good no matter where you are, but at the famous 17th at Pebble? Man. So close, yet so far.

Alvarez is now 31 years old and boasts a professional boxing record of 57-1-2, his only loss coming to Floyd Mayweather Jr.

He has told the media before how he plans to retire from boxing when he is 37 and then play golf every single day.

Judging by his swing, you wouldn't bet against him playing at a professional level. It's just not fair that he's good at two sports.

Throughout his illustrious 16-year career, he has held 15 different versions of a world title belt.