Charlie Woods' golf swing is admired by just about everyone in 2022. 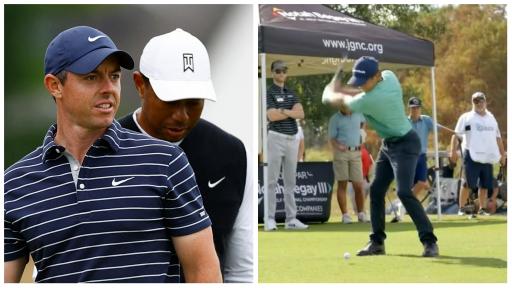 Charlie Woods' golf swing is already being compared as a hybrid of both his father Tiger Woods and Rory McIlroy at this week's Notah Begay III Junior Golf National Championship.

Charlie, who was competing in the Boys 12-13 category this week, carded rounds of 72, 69 and 71 to finish 1-under-par for the 54-hole tournament at Koasati Pines at Coushatta.

That saw Charlie finish in 11th place and 14 strokes behind the winner Cole Kim.

Tiger Woods was on his bag for all three rounds and Charlie was seen rocking a snazzy Masters polo shirt and TaylorMade cap.

Golf fans have not only been commenting on Charlie's incredible golf swing, but also his incredible transformation.

-2, 69 for Charlie today. Lots of incredible junior golfers with a ton of skill playing this event. The future of the game is bright pic.twitter.com/OwIc4Iy5xq

Here's how golf fans have been reacting to Charlie Woods' golf swing:

If you just focus on his shoulders and down, I’d swear that was Tiger.

That’s some serious speed for a little guy!

Golf fans have also been pointing out that Tiger is still heavily limping as he continues to recover from serious leg injuries sustained during his horror car crash of February 2021.

One onlooker noted how Woods "didn't look right" the last time he looped for Charlie.

Woods is using a golf cart to get around the course, which is something even PGA Tour superstar Will Zalatoris wants him to do going forward.

It was also similarly amusing to see Woods going all-in by wearing a caddie bib.

Tiger is on the move at the NB3 Jr https://t.co/pairJBBk4A pic.twitter.com/UwoFfLrtOQ

Tiger rocked up at the 86th Masters last April and turned heads when the swoosh wasn't visible on his feet.

He said there was "nothing" in that and he was working with Nike to develop a more comfortable shoe to provide more stability with his heavily damaged right leg that was crushed in his car crash.

The 15-time major champion has not said when he will return to professional golf but he has been confirmed as a participant in the latest edition of The Match.

The Match: Everything you need to know

Tiger will team up with Rory McIlroy to face off against Justin Thomas and Jordan Spieth at Florida's Pelican Golf Club on 10 December.

It is conceivable that Tiger will play three times in December.

Woods confirmed today that he will be teeing it up in his annual Hero World Challenge from December 1 to 4.

That will mark his first competitive tournament since missing the cut at the 150th Open Championship at St Andrews in July.

He will then join McIlroy for The Match on December 10, and then more than likely team up with his son Charlie once again in the father-son PNC Championship from 17 to 18 December.

But judging by Charlie's swing they could go one better than last year and win the tournament.

News emerged yesterday that Woods had won the PGA Tour's Player Impact Program (PIP) for a second year in a row.

McIlroy gave the information away to the Associated Press, despite the PGA Tour yet to confirm the official results.

Woods only played in three major championships, and nine rounds in total as a result of his ongoing injury concerns.

It is believed the PGA Tour will confirm the Top 20 players receiving their PIP bonuses before the end of the month.

That is even more than what Dustin Johnson earned from LIV Golf tournaments this season.

NEXT PAGE: TIGER WOODS WINS THE PIP DESPITE PLAYING ONLY NINE ROUNDS IN 2022!