Do golf fans prefer easy or tough set-ups on the PGA Tour?

We asked our readers if they prefer watching PGA Tour players thrive or struggle. There was one resounding and unsurprising answer... 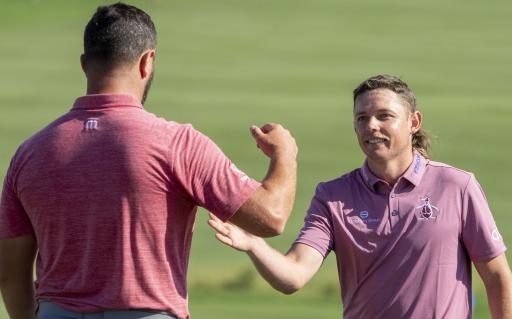 At the Sentry Tournament of Champions, Cameron Smith broke the record for the lowest winning score in a 72-hole event in PGA Tour history.

But even if Smith wasn't playing, Jon Rahm would also have broken the previous record of 31-under-par set by Ernie Els in 2003.

And if the World No. 1 had extended his break from golf and not played in Hawaii last week, Matt Jones in third place would have broken the record on 32-under-par as well.

Rahm attributed the low scores and the general desire of PGA Tour players to improve to Tiger Woods' legacy. The 15-time major champion set the standard at the peak of his career.

If what Rahm says is true, it produced an incredible leaderboard at Kapalua Resort. But in terms of a viewing fan, do you enjoy watching a birdie fest or would you prefer to watch the players struggle?

You watch golf to watch your favourite players make birdies and win, so technically, the more birdies the merrier. The swings of Rory McIlroy, Justin Thomas and Collin Morikawa in full flow are works of art and it is hard to get bored of seeing top players in full flight.

The best players on the PGA Tour are freakishly good and this is an appropriate word to use. They are freaks in their field and the vast majority of viewing fans can't relate to their ability and talent.

What most of us can relate to is watching professionals hit shots from deep rough, missing the fairways and carding abnormally high scores.

It reassures us. The tournaments down the years that produce the highest scores would usually be the US Open or when the conditions are at their worst at The Open Championship.

When Bryson DeChambeau won the US Open in 2020, he was the only player under-par. In 2008, Padraig Harrington won his second Claret Jug on 3-over-par.

These are the occasions that golf fans and regular club golfers can relate to the tour professionals. We enjoy watching them thrash around and squirm in difficult conditions.

This attitude was the overriding response to our question as to whether golf fans prefer birdie fests or tough tournaments on the PGA Tour. Take a look below at the best responses from our readers:

"Prefer it a little Tougher, I also think it is a way of controlling the massive hitters, if wayward they are punished in the rough," one fan said.

RELATED: SHANE LOWRY ON PLAYING THE SAUDI INTERNATIONAL: "I'M A GOLFER, NOT A POLITICIAN"

"The tougher, the better!! And read your own damn putts!!" one fan commented.

"Tougher setups. 34-under-par is a ridiculous score," another fan said.

"For what they're playing for in only 4 days time I want to see them earn it meaning the toughest course setups possible..." another fan commented.

"Tougher setups... Shooting Ducks in a Bathtub isn't really a lot of fun," one fan said.