The arm-lock putting method has come under intense scrutiny in recent weeks, with Brad Faxon joining those who would like it banned. 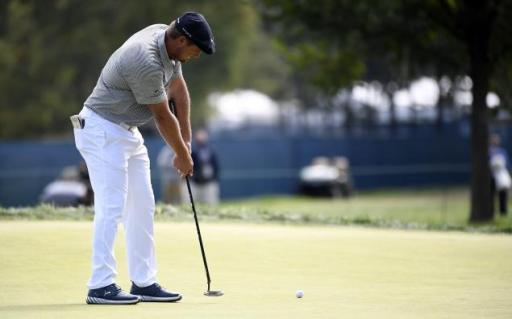 Brad Faxon became the latest figure in golf to speak out against the arm-lock putting grip, which we have seen players such as Bryson DeChambeau and Will Zalatoris use this season.

GolfMagic reported yesterday that Faxon believes the arm-lock putting method comes under the definition of "anchoring", which was banned back in 2016.

"That is not swinging the golf club," said Faxon.

"I don't think that our forefathers of this game thought that you should be able to do that at all."

Anchoring, which refers to a golfer that uses another body part to guide their putter, was banned five years ago after it was deemed an illegal way to grip the club on the putting surface.

Golf fans also had their say on the debate:

"Ban all anchoring and the awful green books. Pros should be able to read greens without outside assistance," one fan said.

"I think the most telling thing with this is those who currently armlock have an extremely difficult time putting without it (Webb, Bryson, Keegan, Adam Scott etc)," one fan commented.

"If it’s anchoring in any way, ban it," another fan said.

"Well said Brad. The arm lock is worse than the broomstick putter. Just listen to what the commentators say," another fan commented.

"Amazing how they only complain when guys start winning. I bet no one would care if he missed the cut every week," one fan said.

Faxon is known as one of the PGA Tour's best ever putters and this shows as he won eight times on tour and made two appearances for America at the Ryder Cup in 1995 and 1997.