Jack Nicklaus on former business partner: "He acted as if I was his property"

Jack Nicklaus has accused his former business partner Howard Milstein of trying to control every single aspect of his life, per court documents. 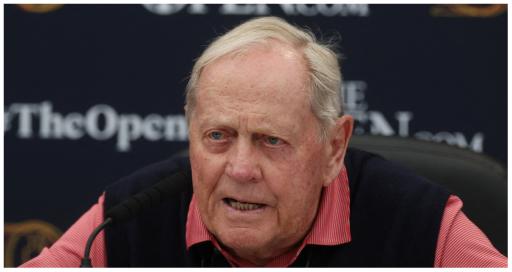 Legendary golfer Jack Nicklaus has accused his former business partner of attempting to control every aspect of his life.

Earlier in the year reports surfaced the Golden Bear was being sued by the Nicklaus Companies.

The lawsuit - lodged on 13 May in New York - accused the now 82-year old of engaging in "repeated acts of bad faith against the best interests of the company, including acts to intentionally and maliciously undermine the company."

Other alleged violations include Nicklaus "improperly negotiating with officers from Golf Saudi".

It has been reported Golf Saudi offered him the sum of $100m to be the face of a breakaway golf tour, now known as LIV Golf.

Nicklaus, who has won 18 major championships in his illustrious career, confirmed he did meet with their representatives at the Bear's Club when he spoke at a news conference before the Memorial on the PGA Tour in June.

He insisted his meeting was out of courtesy.

Milstein has claimed Nicklaus was paid $145m in 2007 to provide "exclusive services and properties to the Nicklaus Companies."

This deal reportedly came about when Nicklaus turned his attention to designing courses and partnered with Emigrant Bank, which is controlled by Milstein.

When the markets crashed in 2008, Milstein took control of Nicklaus Companies. Nicklaus wanted to leave, but was persuaded not to.

Nicklaus - who has had a motion to dismiss the case rejected - has now been deposed.

You can read the full transcript of his deposition by clicking here.

Below are two key exchanges where Nicklaus claimed Milstein tried to control "every aspect of my life".

Q. What led you to decide to end your employment?

"I had just had enough. I had enjoyed a successful career both in professional golf and the design of golf courses, and I had earned the respect of many throughout the world. I had turned my success in sport into success in business, and then I ruined it by allowing Howard to invest in that business.
"I did not want to be under Howard’s control any longer. So, I decided it was time to end my employment with the company and begin the five years I needed to serve before I could design golf courses and endorse products on my own again."

Q. Did your relationship with Mr. Milstein change after he obtained permanent control over the company?

"It did. Once Howard had permanent control of the company, he acted as if he owned me. He tried to control every aspect of my life, from what I did, to whom I spoke with, to where I went, as if I was his property.
"I always tried to be respectful, but there was no respect in return. I also tried very hard to make the relationship work, but it became increasingly obvious that I had aligned myself with a person who didn't respect me as a human being."