Jordan Spieth, Justin Thomas and others in Hall of Fame crowd for Tiger Woods 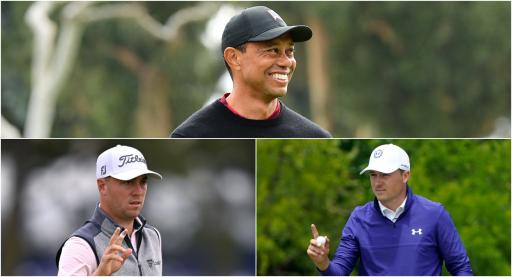 Jordan Spieth and Justin Thomas were among a number of PGA Tour stars to appear at Tiger Woods' induction into the World Golf Hall of Fame.

Spieth and Thomas appeared at the ceremony which took place in Ponte Vedra Beach at the PGA Tour's Global Home headquarters.

PGA Tour winners Tony Finau, Billy Horschel, Tom Hoge and Canadian Mackenzie Hughes were also in attendance. They would not regret their decision to attend.

I feel so honored to have been inducted into the @GolfHallofFame tonight. Having Sam introduce me and my family there watching, it made it even that more special. pic.twitter.com/kVKLv5qOJC

Woods came on to the stage after his daughter Sam gave an emotional speech about her father. The 46-year-old then gave his own speech about how his parents devoted their time to his golf career.

The 15-time major champion neglected to speak about the many achievements in his career. He instead spoke about how he faced discrimination when he was a budding golfer and his admirable work ethic.

"So without the sacrifices of mum who took me to all those junior golf tournaments, and dad, who's not here, but who instilled in me this work ethic to fight for what I believe in, chase after my dreams, nothing's ever going to be given to you, everything's going to be earned.

.@TigerWoods tears up as he reflects on the moment his family risked everything for him.@GolfHallofFame pic.twitter.com/bso9xge7hM

"But two, and more importantly, you don't deserve it. You need to earn it. So that defined my upbringing. That defined my career."

Before the ceremony, Woods walked in with his son Charlie prior to putting his suit on. This allowed fans to see his right leg without a protective sleeve for the first time.