Justin Thomas has married his long time girlfriend Jillian Wisniewski in Franklin, Tennessee, taking the opposite approach to Paulina Gretzky and DJ. 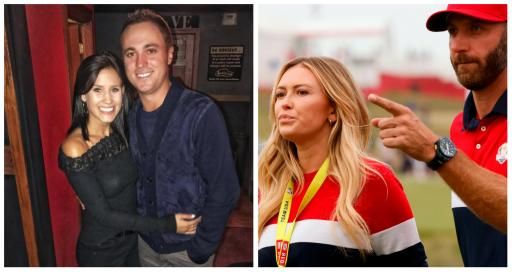 Justin Thomas appears to have taken the opposite approach to golf's glamour couple Paulina Gretzky and Dustin Johnson by having a private wedding.

Over the weekend the two-time major champion, now 29 years old, got hitched to Jillian Wisniewski.

Wisniewski, also the same age, has been supporting Thomas in the galleries on the PGA Tour and in major championships for a number of years.

Thomas announced their engagement on the No Laying Up podcast over a 60-minute interview in 2021 where he talked life, goals, mental health struggles and Tiger Woods.

Related: Everything you need to know about The Match featuring JT

At the time, Thomas and Wisniewski had been dating for around five years.

Wisniewski is a graduate of the University of Kentucky and according to the PGA Tour official website has previously worked for advertisement agencies in Chicago.

Wisniewski has been by Thomas's side through Ryder Cups, Presidents Cups and when he won the PGA Championship in 2017 and 2022.

Thomas, at the time of writing, is a 15-time PGA Tour winner. He's also won four times on the European Tour.

Other than his two majors, arguably his biggest victory came at the 2021 Players Championship at TPC Sawgrass.

Unfortunately there are no pictures or videos of the Thomas/Wisniewski wedding as of yet.

Their decision was in stark contrast to the likes of the aforementioned Paulina and DJ. Their wedding looked - quite frankly - absurd.

Similarly, when Jena Sims married Brooks Koepka they also pulled out all the stops.

Both Jena and Paulina had teased their big days with scantily-clad pictures of their bachelorette parties.

For Wisniewski, there was none of that however she has been active on social media in the past, but was mainly posts pictures of their dog Franklin.

We'll have to wait until Thomas gives a press conference to see if we can get any more details of the big day.

However we do know that Spieth was his best man.

Yeah...we're gonna need to know what his best man speech was like!

The only thing we do know, per a report by Claire Rogers of GOLF, is that the wedding was in Franklin, Tennessee.