Justin Thomas has lifted the lid on how it came about that Jim "Bones" Mackay decided to swap his mic for a bag once again and how the Netflix documentary has started. 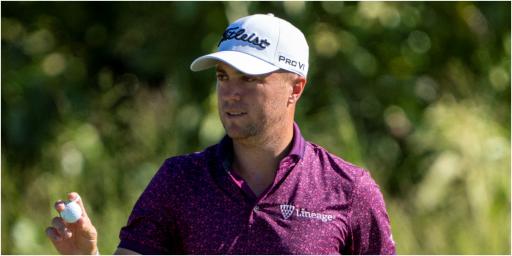 Justin Thomas knew he didn't have to get on his hands and knees and beg for Jim 'Bones' Mackay to come back to carrying.

That being said, he was reportedly nervous about asking Mackay - one of the most decorated caddies ever - to swap the mic for a bag again.

Bones has always been a popular figure in golf circles. But his detailed analysis inside the ropes on PGA Tour coverage has been unrivalled.

The famous carrier was on the bag for Phil Mickelson for more than 25 years and saw him through many famous victories.

They mutually parted ways in 2017 and Lefty turned to his brother Tim, who was previously a coach himself.

Mackay was on the bag for Thomas in 2018 due to an injury of Thomas' caddie longtime caddie Jimmy Johnson.

Then in August 2020 he was on the bag as Thomas won WGC-FedEx St. Jude Invitational.

Last September it was announced that Mackay would go back to carrying after five years working as an on-course commentator.

Thomas was on hand to speak about how it all came about. Amusingly, he admitted he was a bit nervous about popping the question.

Related: How Justin Thomas has grown as a person since slur

"To be honest, no, I didn't [think the conversation would be tough]. I know he had a great time when he caddied for me a couple years ago, and I shouldn't say I didn’t think it would be real easy, but I didn't feel like I was going to have to get on my hands and knees and beg.

"It would just be more of like a, 'Hey, dude, I want you to,' and I know he wants to, but at the end of the day every decision needs to be a little selfish. If it made sense for him, then it would make sense for us and I’m glad that it did.

"It's been great. It's like a new relationship, you're always wanting to do something to get it better. We're talking quite often. Not as much anymore versus the first handful of events. What did I do this week that I could do better next week? What did I do that you didn't like. Now we're just getting comfortable enough where we're just kind of go."

Another topic of conversation was the Netflix documentary, which has begun filming.

Harry Higgs and Joel Dahmen, along with their caddies, were reportedly mic'd up during the first round at the Farmers Insurance Open.

Of course, Thomas was asked about this and explained the majority of footage fans will not be surprised with.

But his focus is on golf and he said he won't let the cameras distract him getting inside-the-ropes footage.

"On the golf course stuff is very obvious, everybody sees the footage of us in practice rounds on Golf Channel or then us in a tournament, so I don't think that stuff’s going to be anything groundbreaking. Just the fun different things that people wouldn’t necessarily see.

"They might see a picture or video on Instagram of me hitting balls at home or me working out, but maybe not through an entire club-fitting or through a session with my dad and I. Just me drinking beer with my buddies watching football.

"There's a lot of different aspects that I think will be great for not only myself but guys that give people a little better understanding of who we are and grow our brand a little bit."