Justin Thomas saw the funny side after one fan spotted a "LIV Golf" present in the kids' lockers ahead of the Justin Thomas Junior Championship. 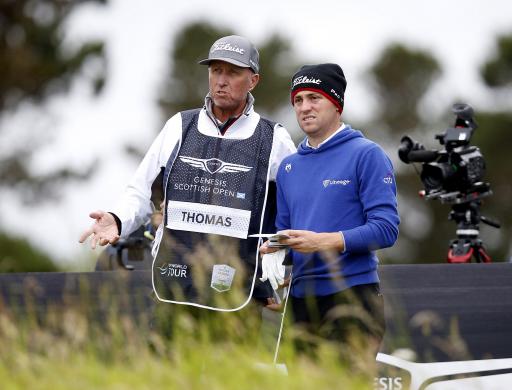 Justin Thomas took a shot at LIV Golf after posting a photo on his Twitter ahead of the tournament he sponsors on the American Junior Golf Association.

The tournament welcomes competitors both male and female aged 12-19, in a 54-hole stroke play format

Thomas, 29, posted an image of the kids' lockers stocked full of equipment ready to go.

One eagle-eyed fan noticed the LIV Pur Nutrition bars. Was this a dig at the LIV Golf series?

No, Thomas is an ambassador for the sports nutrition company, alongside Jordan Spieth and United States Ryder Cup captain Zach Johnson.

Although Thomas did see the funny side of it:

It’s almost time for @AJGAGolf #JustinThomasJr! The kids lockers are stocked and ready to go pic.twitter.com/31kwrsphAg

Nah that’s from me. I have intentions of actually growing the game

The phrase "growing the game" has been consistently used by the LIV Golf rebels as they defend themselves from critics.

Thomas himself has been an outspoken critic of the LIV Golf series since chatter began about it more than two years ago.

Before the 150th Open Championship at St Andrews, Thomas went in hard on the LIV players, urging them to admit their financial-based decisions.

He previously said: "I understand they're [the LIV Golf players] being fed everything what to say and all this stuff, but it's just … for them to say that this is all for the betterment of the game … I mean, to be perfectly honest I just wish one of them would have the balls to say, 'I am doing this for the money.'

"Like, I personally would gain a lot more respect for that but it's just the more they keep talking, the players keep talking and saying this is for the betterment of the game the more agitated and irritated I get about it."