This remarkable statistic shows just how much Rory McIlroy would have to win per year to catch Tiger Woods in number of wins. 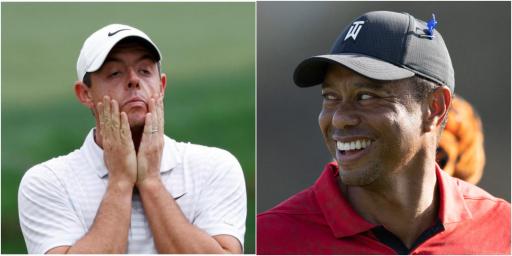 It seems difficult to believe. The Northern Irishman who once bounced down the fairways as an exhuberant, wide-eyed teenager bursting passion for the game is now a father and has won four majors. Whether or not he should have won more of the big ones is up for debate.

To go along with that, McIlroy has 20 PGA Tour titles, including 14 wins on the European Tour. McIlroy spoke a few weeks ago about post-golf aspirations. It seems he has no desire to play on the PGA Tour Champions.

If he's not competing with the best, then he has no desire to play, he said. Well, time will only tell with regards to that. Can you imagine McIlroy not rocking up to the Masters for as long as he physically can? Me neither.

Golf stat guy Lou Stagner was on hand again to outline this remarkable statistic about McIlroy in comparison to Tiger Woods. If he were to win four events a year for the next 15 years it still leaves him two shy of the cat. "Tiger is mind numingly next level," he says.

That's because when Woods was the same age, he had already won 70 times. His 2000 season still stands alone. Nine victories for the cat.

Rory is about to turn 33 years old.

If he won four events per year, for the next 15 years, that gives him 60 additional wins (80 total).

Rory is the man, but 82 wins by Tiger is mind-numbingly next level.

McIlroy will be in a star-studded field when he plays the Genesis Invitational at Riviera, hosted by Woods.

McIlroy missed the cut last year at this tournament. A second round of 76 put him way outside the cut zone and it marked the first time he missed a cut since the 2019 Open Championship. That was 31 successive cuts made.

Woods holds the all-time record with 142 consecutive cuts made.