Rory McIlroy has paid tribute to Adam Sandler and the cult film that first hit our screens in 1996. 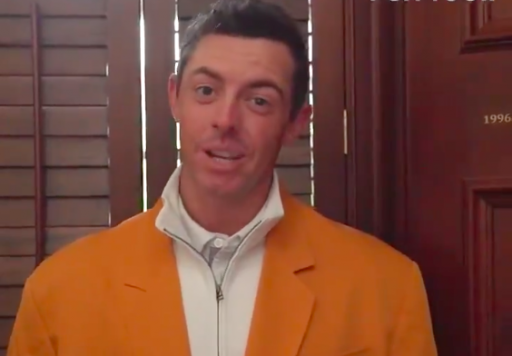 Like the rest of us, Rory McIlroy is a huge fan of Happy Gilmore, the cult film which is celebrating its 25th anniversary this year.

Ahead of the Tour Championship at East Lake this week, a tournament that Happy famously won by beating Shooter McGavin all those years ago, McIlroy has paid tribute to Adam Sandler who starred in the film.

The Northern Irishman is aiming to become the first player to win the FedEx Cup three times this week, but he will have to emulate Happy's achievement if he is to do so.

However, it looks as though McIlroy has already got his hands on a gold jacket which Happy earned with his dramatic victory, even if it is slightly too big for him.

"I just want to say, sorry you can't be here this week. We all wish you were here, I've got a gold jacket and a replica Calamity Jane to commemorate your win at the Tour Championship," said McIlroy.

Celebrating the 25th anniversary of Happy Gilmore.@McIlroyRory has got a Gold Jacket and Calamity Jane on the way, @AdamSandler. pic.twitter.com/BeWXe4p4gc

"I just want to say thanks for all the laughs that you've given us over the years. Happy Gilmore is one of my favourite movies. You're awesome, I'd love to meet you one day and hopefully, we can catch up soon."

McIlroy will start on 2-under-par later today at the Tour Championship, which is eight shots behind the FedEx Cup points leader and BMW Championship winner Patrick Cantlay.