This was teased as a big deal but not many people tuned in compared to previous editions of The Match. 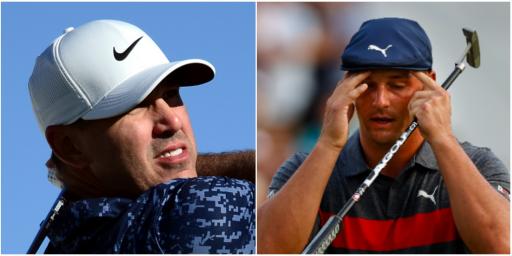 Brooks Koepka's grudge match with Bryson DeChambeau has proved to be a ratings flop.

But in my opinion The Match delivered everything it was supposed to and I will die on this hill.

The golf journalist Eamonn Lynch had it correct in my view when he stated this "feud" was essentially killed by commercialism.

Yet in my opinion it still didn't detract from what The Match is all about: just two great golfers playing the game.

I expected the pair to trade silly barbs back and forth like boxing champions. They were in Las Vegas, after all.

I expected their sponsors to think of interesting and amusing ways to try and tease The Match.

Wasn't it just a stroke of luck that when DeChambeau arrived in Las Vegas he stepped off the plane with a bottle of ZenWtr in full view.

That's ZenWtr if you missed it.

When I'm not hitting bombs, I like to rehydrate with a nice bottle of [insert brand].

What strange timing, too, that Koepka signed with Cleveland/Srixon a week before The Match.

At The Match I expected Koepka to replicate the expression that went viral at the height of their feud. It only took two holes.

Yet I still watched, and will continue to watch and ignore the cacophony of commercialism.

I just want to appreciate two fantastic golfers and admire the way they can hit a golf ball better than you and I ever will.

This was no different to Shell's Wonderful World of Golf. Easy viewing. Interesting viewing.

But forgettable viewing, we move on quickly. Until the next edition.

This edition, the fifth in the series, was reportedly a ratings flop.

It was broadcast in the United States on the TNT cable channel, where 633,00 people tuned in to watch the 12-hole match.

This meant that it achieved a Nielson rating of 0.2. When Tiger Woods returned to glory at the 2019 Masters, 15.4 million people tuned in.

Comparing it to the second edition of The Match where Woods played alongside Phil Mickelson, Tom Brady and Peyton Manning, the peak audience was 5.8 million.

The Match admittedly fell in the fall season of the PGA Tour where audiences are typically lower.

But still, it didn't beat the figures for the most recent CJ Cup at Summit in Las Vegas where Rory McIlroy won his 20th PGA Tour title.