Scottie Scheffler has revealed a mental error and the fact he was trying to hit a "cool shot" led to his memorable amateur hour moment. 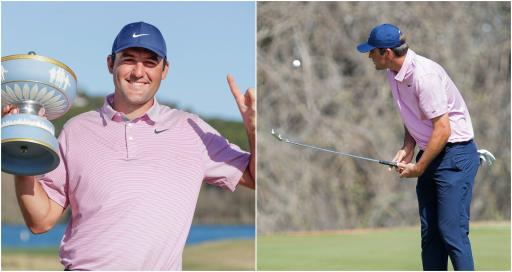 New World No. 1 Scottie Scheffler says he was "trying to hit a cool shot" and "show off a little" before he duffed one into the bunker before holing out with his next attempt during the final of the WGC Match Play against Kevin Kisner.

Scheffler managed to get to the top of the world at just the age of just 25 years old by capturing his third win in five starts on the PGA Tour before breaking down in tears at the side of the green as he was flanked by his family.

His father hugged Scheffler told him: "You're pretty good at golf man. I love you, Scott. I'm more proud of who you are than your golf. You're a wonderful young man." Scheffler later said he never got as far as reaching the best player in the world in his dreams.

Scheffler was cruising to victory in his seventh match of the week against Kisner, who himself proved what a match play specialist he is and just how darn annoying he can be. But there was one moment that threatened, if at all briefly, to derail Scheffler.

At the par-5 12th hole he sent his wedge approach (from 190 or so yards) just next to the greenside bunker. But what happened next was a real amateur hour moment when he fluffed his chip directly into the bunker. He was up by three holes, but momentum is a killer in this format...

Scheffler explained at his winner's press conference: "You asked about No. 12? Going into 12 I hit a great putt on 11 I thought was going to go in and it didn't, so I think I was 3-up at the time and hit a great drive, really good second shot, and then that pitch was really awkward.

"I would say I got a little bit aggressive with my line. I wanted to hit a really cool shot and kind of -- that was maybe show off a little bit. That was definitely maybe a little mental error on my part.

"I just didn't really react to it. I knew that I made the mistake. I didn't get a bad break, didn't get screwed or anything like that. I just hit a poor shot, and it was really one of the few poor shots I hit today.

"The bunker shot wasn't long. I was trying to make it. Just hit it on line and I was fortunate to do that, and it definitely was fortunate to see it go in, as well, and keep the momentum on my side."

A picture also emerged on social media of Scheffler as a teenager attending the WGC Match Play. Austin Country Club, Scheffler reckons, is a golf course that he has played more than 100 times. Other than just winning every week, it was a reason why he was heavily tipped.

Did he ever follow one person in particular for inspiration? You bet. None other than Rory McIlroy. Scheffler said: "I would always try to watch somebody.

"So like I remember watching Rory hit balls on the range and I remember hearing the noise that his club head hitting the ball made and being like kind of taken aback, like wow, this was hit really solid.

"I just remember watching and kind of studying those guys and just seeing what I could learn just because there's so many talented guys out here and there's so much I can learn from them that any tidbit I could pick up on was going to be beneficial."