Rick Reilly outlines how Phil Mickelson is completely devastated by what's happened how he had a heart-pounding ride in Greg Norman's car. 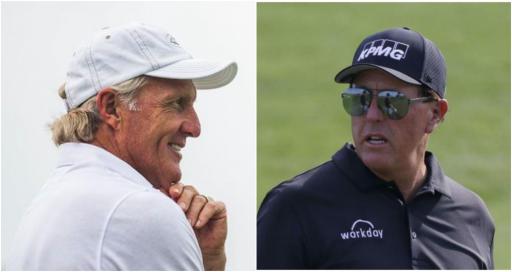 The American sportswriter Rick Reilly has revealed some interesting stories about Phil Mickelson and Greg Norman.

Reilly, 64, recently joined Golf Digest's "Be Right" podcast where he discussed his new book "So Help Me Golf: Why We Love The Game".

The journalist spoke on a number of topics including Norman, 67, who has been constantly in the golf news recently.

Other topics included Tiger Woods, Jack Nicklaus, and the two sides of Mickelson.

Reilly outlined the time he met Norman to do an article for Sports Illustrated.

"He [Norman] was friends with this race car driver and I said, 'Did he teach you anything?' and he goes, 'Watch this,'" Reilly said.

"We're on a two-lane road in backwoods Dublin, Ohio, we do a complete 180, I'm seeing telephone poles and trees and my life going by.

Elsewhere, Reilly talked about the time a journalist approached The Great White Shark before his infamous collapse at the 1996 Masters.

The journalist reportedly told Norman when he held a six-shot lead before the final round: "Sharky, even you can't f--- this up!"

We all know the story. Norman recently re-lived the pain of that Sunday at Augusta National in a recent documentary.

Reilly said he approached Norman afterwards and asked him if he was okay.

Norman reportedly said: "It's okay, it's okay that hug Faldo gave me on the 18th was the greatest hug I've ever got in my life.

"It was almost worth the pain for that hug. And he started talking about how his Dad never hugged him."

Reilly said Norman then invited him shark diving. Reilly said he turned down this offer.

Of Mickelson, Reilly said that the "casual golf fan" doesn't really care too much about his comments that forced him into exile.

They love Tiger, he said, but they just want to see Mickelson back in the game. "They love Phil," he said.

When Lefty stepped away from the game in February, he did so claiming he was speaking off the record to the biographer Alan Shipnuck.

Shipnuck denies this, and suggests that Mickelson has damanged his professional reputation.

Though Reilly thinks that Mickelson may have misunderstood if he was speaking on the record or not.

"Phil says a lot of crazy s***, right, off the record. But even on the record he's kinda crazy."

Reilly said it wasn't as if Mickelson "killed somebody" or "did something terrible", but: "He said some really stupid things.

"And it also made no sense what he was saying. These guys [the Saudis] are m-fers and they're murderers, but I might go work for them!"